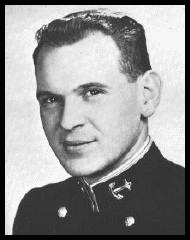 After a year at Villanova University, studying for a degree in Mechanical Engineering, Frank came to the Naval Academy equipped with a keen mind and quick wit. These two traits coupled with his engineering background made Frank an all around threat. Always ready to provide a few laughs for his classmates to ease their daily burdens, he made many lasting friendships during his stay at the Academy. Frank was an active participant in company sports and could be counted on to strengthen any team with his spirit and skill. During his spare time he could be found studying, listening to music, or engaging in friendly discussions covering a wide variety of topics. Always ready to have a good time, Frank could be counted on to liven any social function. A career even more successful than his Academy days awaits Frank upon graduation. 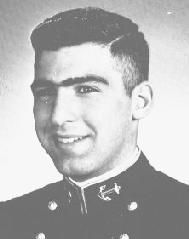 Bruce came to USNA from Rutgers Prep School in New Brunswick, New Jersey, where he was All-State in both soccer and basketball, and also lettered in baseball. At the Academy, "Gunks", as he was called, continued his avid participation in sports by playing varsity baseball and basketball. He always came back from summer leave with one of the deepest suntans in the class, since he spent every waking moment on the nation's beaches. Among his favorite hobbies were listening to music, especially rock and roll, eating, and, of course, sports. While at the Academy he clung tenaciously to his vow of abstinence from dating, despite the entreaties of his classmates. Bruce's most outstanding trait was his winning, magnetic personality, and he was known and universally liked by the members of his class. Bruce is an outstanding person and can anticipate a happy and successful future. 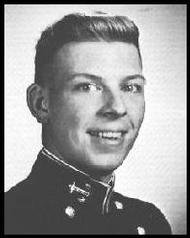 Coming to the Academy from the U. S. Navy, Bill was probably best known for his cymbal-playing chores in the Midshipmen Concert Band. Percussion was no new job for him for while at NAPS he was one of the drummers in the band there. An avid pinochle player, he could be found almost every weekend searching for a three-or-four-some. His spare time during the week was taken up with the band, where he served as co-ordinator of the drum section, the YP Squadron, and the German Club, where he maintained a silence which was not in the least characteristic. Also a squash enthusiast, Bill could be seen heading for the courts on Wednesdays and Mondays after parades. While no genius, Bill managed to keep his marks up to par. Bill intends making a career of Naval Aviation and with his warm smile and cheery hello, should go far in his chosen field.