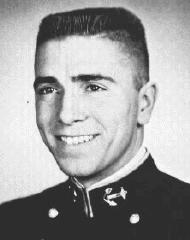 Bill, who also answers to "Kahn," is a mountain-boy from Cumberland, Maryland. Although his family home is now in Wheaton, Maryland, the hills will always occupy a prominent place in his heart. Bill was never able to bring himself to worry about being on time for those three-times-daily meal formations, although he often gave his roommates a real scare by waiting until the last possible moment to begin his preparations. His mania for collecting things made his room a necessary stop for anyone in quest of any sort of miscellaneous hardware. Gymnastics and a nuclear physics major are two big avocations in Bill's life. To both of these pursuits he character- istically applied his enviable capacity for perseverance and unswerving application to a job. This quality, coupled with his unmatched, easy-going good nature, will take him far on the road to success in any field he chooses to enter. 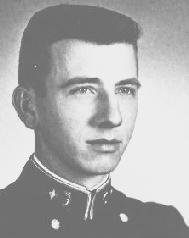 Ron came to the cloistered halls of the Naval Academy directly from the heart of Dixie -- Birmingham, Alabama. Ron broke up the monotony of the first year by taking an active part in the Masqueraders, Naval Academy Christian Association, and the German Club. After conquering the attraction of sleep and his bed at the outset of youngster year, Ron sat down to plucking his guitar and hitting the books, but to no avail. He still lacked that guitar proficiency and the Superintendent's List was yet a goal to attain later. Always one for variety, he played a different sport every season at the Academy. If Ron had spent half the time studying he did with the femmes, he surely would have been one of the class' outstanding scholars. After looking at Naval Air, Ron felt that he had found the service for him, and we are sure that he will do very well in his choice. 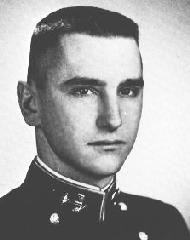 Wilson, a Navy Junior, came to the Naval Academy from San Juan, Puerto Rico, where he finished his last two years of high school. He concentrated his athletic endeavors on plebe and varsity swimming, where he swam backstroke during his four years at Navy. Academics have never been a major problem for Will, as he has stood in the top quarter of the class since plebe year. Continually trying to improve himself academically, he could always be counted on to be of help to his classmates in their studies. Wilson's Naval career will be in the Surface Fleet or on a submarine.