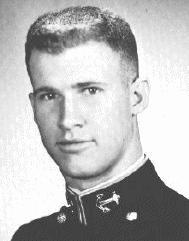 Bob is a dyed-in-the-wool rebel. Carrying over a tradition he started in high school, he has led a varied, ambitious, and sometimes hard life. He has shown his versatility by trying out for light-weight crew and varsity soccer. Choosing soccer as the one in which he could best serve himself and the Academy, he showed great improvement throughout the seasons. To fulfill a longing to participate in musical activities, he played saxophone in the concert band and took part in the Musical Club Show. He made frequent appearances on the Superintendent's List, in addition to taking part in the elective program in order to more fully take advantage of the opportunities offered him. We consider Bob a sincere hard worker who shall go far in whatever facet of life he decides to enter. 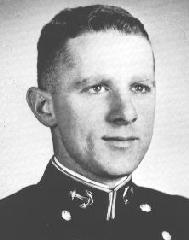 Bill started his academy career rather conspicuously. He enjoyed plebe summer. Actually this was not surprising to the classmates who got to know him. Traveling east from the Pacific Northwest, he brought an outlook on life and a set of principles which could not be shaken by either the adversities of plebe year or the temptations of the other three. His tremendous study habits helped him learn and gave him time to help his classmates. Wherever Bill goes in the fleet, his seniors may expect jobs done cheerfully, efficiently, and ahead of schedule. He will be an officer of great moral character in the true sense of the phrase.

Bill came to the Academy straight out of high school from Montrose, Colorado. Since he first entered the Naval Academy, his interests have been centered in academics. His major is mathematics, and he is an avid supporter of the Advanced Mathematics and Science Seminar. His sincere application to studies has earned him a place on the Superintendent's List and the right to wear stars. Any spare time that he can find is taken up with correspondence courses and library research in mathematics. Second only to his love for math are the Rocky Mountains of his home state. Though quiet and reserved, Bill has a sense of humor that is truly enjoyable. His humorous and satirical comments prove that all is not serious study with this midshipman. After graduation, Bill is looking forwared to postgraduate study, to serve the Navy better with his education.