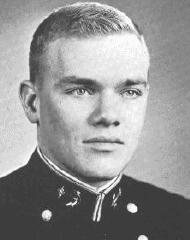 Bill, a Navy junior, was born in Birmingham, Ala., but now claims Falls Church, Va., as his home. He graduated from Gonzaga High School in '59 after a year's vacation spent with his family in Spain becoming well acquainted with a few senoritas. Here at the Academy Bill has made quite a name for himself in company and battalion sports, with boxing as his specialty, as well as being consistently on the Superintenden'ts List. His favoirite hobbies are jazz, parties, and Carvel Hall. The Reception Copmmittee has made good use of the few times he wasn't dragging. His good humor has won him many friends, not only among his classmates, but also among many officers and sailors throughout the fleet. Bill's future lies in submarines and the understea Navy can be proud of his choice. 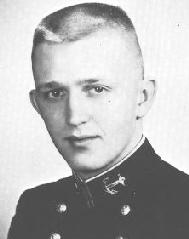 Jim came to the Academy from Massena, N. Y. Although coming directly from high school, he had the groundwork laid out for the activities he was to pursue here. While in high school he was editor of his school paper, a strong competitor in wrestling, and a member of the choir. He has followed these varied interests here by writing for the Splinter, wrestling on the battalion and plebe teams, and singing in the chapel choir and the glee club. Jim's ability to solve problems has helped him to excel in mathematics and engineering. For this many of his friends are truly grateful because he was always glad to explain a solution. Though Jim is a fighter he has a friendly and easy going nature that has won him much respect and friendship.