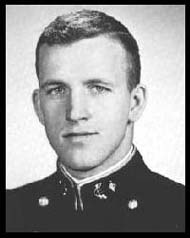 Easily recognized a block away by his ambling "cornfield" gait and known to be easy to get along with, Marshall will be long remembered by his many friends throughout the Brigade. A natural athlete, he quickly became a stalwart of the intramural teams, excelling in battalion football and always coming through with the big home runs in softball. Aside from sports his extracurricular activities consisted primarily of concert band. Nevertheless, Marshall was no slouch with the books as his 3.9 final exams indicate clearly. A home-and-country southern boy, he has been a great asset to his class and the Brigade and will continue to present a fine example as an officer. 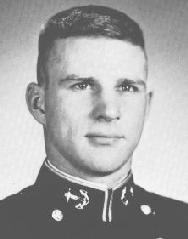 Pat, born in Olny, Ill., calls Coshocton, Ohio, his home. Coming to the Academy with a long list of athletic and academic honors, he quickly proved that he could do as well, if not better, here. Pat played football, lacrosse, and was a diver on the swimming team his plebe year. Since then, he has devoted his time to varsity lacrosse. Pat has also maintained a high academic average. Not only does he excel in sports and studies, but he also has a reputation as a ladies' man. Never without a date, he has won the heart of many of the fairer sex. To all this, he adds memberships in the Reception Committee, Choir, Radio Club, and a charter membership in the "early morning and dawn hiking club." Pat goes to the surface fleet upon graduation, and the fleet can be proud to accept this promising, potential Admiral. Being a Navy Junior subjected to various environments ranging from Brooklyn to Japan, "Spence" decided that Navy life should be his career. A Southern boy, he first decided to enter the Naval Academy soon after receiving his first pair of shoes at fifteen. He spent most of his time cruising on the bay as a member of the Ocean Sailing Squadron, and during his free time he could be found collecting money as company representative on the Ring and Crest committee, cutting out coupons as a section editor on the <I>Lucky Bag</I> staff, or solving world crises in the Foreign Relations Club as a consistent "Bull slash." He spent most of his study hours interpreting the dictionary and unravelling the twisted theories of history and government. Whatever his final career choice, "Spence" will be one officer correctly referred to as "the pride of the Navy."