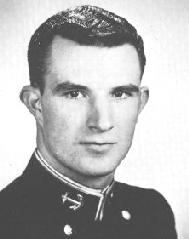 "Thar she blows" is a familiar cry resounding along the eastern shore, as Chuck spends many of his afternoons sailing on the Severn. His excellence as a salty sailor earned him a berth in the Newport Ocean Race. Chuck seems to have his nose in just about everything as is demonstrated by his record on the pistol team, proficiency in academics, and association with several extracurricular activities. His varied interests range from beautiful girls to old jalopies. He received his first contact with the military life at Marion Institute in Alabama, and soon became an adopted son of the South. Chuck's tremendous group spirit will always be remembered. A sharp awareness and keen sense of responsibility will earn for him the deserving reputation of a fine Navy pilot. 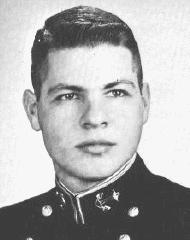 This smiling rebel came North after one year at Columbia Military Academy. Dave prefers southern girls to northern ones and finds time to write several of them. His athletic prowess is well respected, as he has been an outstanding member of the company volleyball, basketball and softball teams. He is also an avid football fan and displays a vast knowledge of this sport. The academic departments have always exhibited an aversion to Dave with the science department showing a particular dislike for him. His quick wit and engaging smile will make him long remmbered by all who knew him. These very qualities plus his determination and desire to do his jobs well will make Dave a welcome asset to any wardroom. 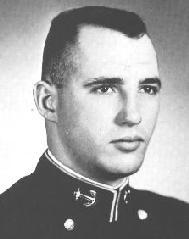 Ron is marked b)i a frankness of speech and a straight forward character which has earned for him the respect and admiration of his classmates. He was consistently a driving force in any project that he undertook-from playing sports to correcting some unfortunate plebe who needed help. He was a member of the plebe wrestling team, and a valuable asset to his battalion football and lacrosse teams every year. He was also a fierce supporter of Navy's teams. He earned his wings in airborne training at Fort Benning during leave after youngster cruise. Being a midshipman, he naturally didn't limit his activities to such mundane matters as sports and studies. He leaves behind a famous, or infamous, record in the field of social activities, being a firm believer in a mid's occasional need for "wine, women, and song." His loyalty to the service, habitually neat appearance, and forthrightness will no doubt make him a welcome addition to the Marine Corps.