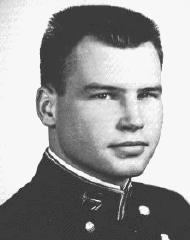 Mac came to Navy straight from Brookings High School in the prairies of South Dakota, and with a cheerful smile and a great sense of humor, he was a welcome addition indeed. Active in intramural sports, Mac was on Brigade Championship teams in company cross country and battalion track. Mac was successful academically, although he can tell about a pretty close brush with Russian, but after this his grades improved every year. On the extracurricular side Mac was an aspiring cartoonist on the Splinter staff, and found plenty of time to allot to the fairer sex, as could readily be seen by a peek into his little black book. Although he'd only seen salt water once before coming to the Naval Academy, Mac is now a confirmed Destroyerman, and we all wish him luck on the big briny. 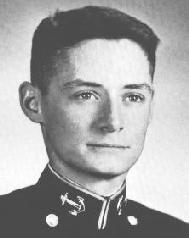 His life long ambition being to attend the Naval Academy, Rich came directly to these grey walls from All Hallows High School in Scarsdale. Dick ran a speedy quarter mile and he soon made his mark on the plebe and varsity track teams as well as cross country. With his outward personality, Rich always joined in the lively activities throughout our four years and he could be counted in on any party available. His extracurricular activities, other than sports, included the Log staff and the Foreigh Relations Club. Riding in the President's jet, submarine cruises, and Hawaiian tours kept his summers well filled. He is now looking forward to a rewarding career in Navy Line as a bachelor -- unless his femme fatale catches up with him. 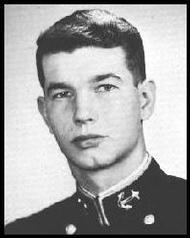 Mike, though returning to Arizona for much needed holidays, still calls the open plains of Nebraska his home. Entering the Academy as an awestruck cornhuckster just out of high school, he quickly made up his mind to make the most of the opportunities at hand. He aimed his Academy years directly at majors in Math and Nuclear Physics. His room soon became a veritable library, and he could always be found passing out much needed information to all who entered. On the athletic field, though never outstanding, he was a solid performer in company cross-country, squash, soccer, and any other team that needed a willing hand. Extra time was devoted to the German, Radio and Rocket Clubs. His future plans include Navy Line, with heavy emphasis on the Silent Service.