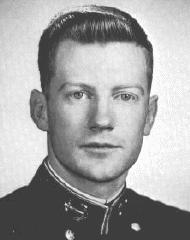 Hailing from a Navy family, Brev brought with him a strong determination to succeed in whatever he undertook. Brev embarked on his four years at the Academy after a year of preparation at George Washington University. Most any afternoon Brev could be found in McDonough Hall climbing his beloved rope for gymnastics; his spare time was usually spent working for the "Trident" or on Sundays helping at the church as an acolyte. His musical preference lies toward popular music, with a flair for rock and roll. Always friendly with everyone but the plebes, he could be found on weekends either in the library studying, in the yard dragging, or in his room writing letters to maintain good diplomatic relations with his many friends. With a soft spot in his heart for his birthplace, Pensacola, Brev plans to return there to fulfill another dream, that of becoming a Navy jet jockey. 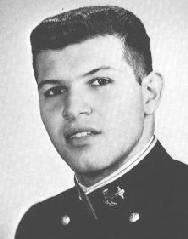 Joe always accompanied his "Hey Pisano" greeting with a hearty slap on the back. As ambitious as anyone could ever hope to be wherever studies were concerned, his subjects included a long study of Latin dishes, some belonging to the kitchen, while others hid themselves under the guise of sultry dark eyes and swaying brown curls. The culinar arts always seemed to lose out to the oopposite sex, however. If he can do this, he should be satisfied, but Joe also applied himself as a second tenor in the Catholic Choir. Physical prowess was also shown by his impressive record in the Brigade Boxing program. Combining all these efforts made Joe a valuable asset. Joe stands before three roads leading to the Marine Corps, aviation, or a combination of both. Whichever road he chooses, the service will gain someone who will make of it a proud and successful career. 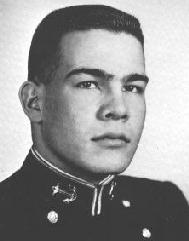 From the ski country around Denver to the marine atmosphere of the Severn was a sharp change of environment, readily accepted by Meredith. He enthusiastically endured the rigors of plebe year and fought the academics with equal fervor. Meredith's active participation on his company's football team plus his magnetic personality and guiding leadership have proved a fine example for the Brigade. These traits were justly rewarded in selection to the Plebe Summer Detail which granted him a wealth of instight into the inner workings of the Academy. A conscientious midshipman and a comprehensive judge of beauty in all forms, he seldom runs into a problem without carefully anticipating a method of solution. Backed by a record of successful undertakings, and his eyesight permitting, Meredith will strive for his Wings of Gold.