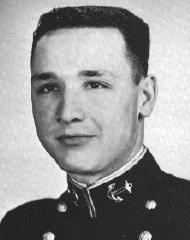 Coming to the shores of the Severn River from Orem, Utah, by way of NAPS, Bob channelled all his energies into the Naval profession. His sincere attitude and constant loyalty gained him many friends throughout the Brigade. On the field of combat, Bob excelled in company sports, pitching his company to a Brigade Championship in softball, and leading other company teams "through precept and example" in soccer and cross country. The same enthusiasm evidenced in his athletic endeavors was clearly visible in his academic pursuits. Bob had that enviable trait of being able to concentrate and study hard at difficult times, not the least of which was cannons booming in both ears from the stereo hi-fi tangle that somehow put out 32 watts of audio power. "Dago" was a favorite subject for him, and rarely a Russian movie in the Yard escaped his attention. Bob has approached his entire career with a sense of sincerity and devotion which can lead him only to success. 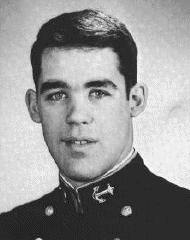 Bill or "Oats," as he is known to his friends, came to the Academy from Altadena, California. Having participated in football, baseball and basketball in high school, "Oats" turned his athletic ability towards plebe soccer and, due to an injury during youngster year, was forced to abandon varsity football hopes. Lacrosse eventually became his sport, and he gained his first letter in the spring of 1961 while scoring two goals against Army. "Oats" lists contemporary music as a main source of enjoyment and put his own musical ability to use during plebe year as a member of the Chapel Choir. Upon completion of summer cruises, it's usually back to the West Coast for swimming and surfing, two more of his many interests. With his great wit and keen sense of humor, "Oats" is sure to keep people smiling and to have a fine career. 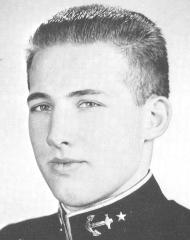 Dave brought his sparkling personality, wrestling prowess, and a habit of success with him to the Academy from his beloved Indianapolis, Indiana. Dave worked tremendously hard and certainly earned his stars. Hard work also paid off for him on the mat, where he wrestled for the plebe team and starred on the battalion teams. Faithful in his own way, Dave still enjoyed himself on weekends and brightened the life of many a young maid. His quick wit and good humor could always be counted on to enliven any gathering. Dave's intelligence, great desire, and capacity for hard work will ensure his success no matter where he goes or what he does.