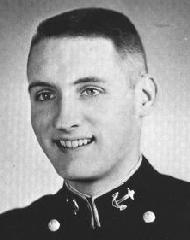 Bob, a product of Utah, came to the Academy by way of Sullivan School in Washington, D. C. Previously, he had attended Bountiful High School in Utah where he was an honor student. He has shown a keen interest in extracurricular activities, both on and off the athletic field. Besides being an active member of the crew team and participating in intramural volleyball and softball, he showed his ability in other fields of endeavor. Music, however, seemed to be his chief interest, for he was a most active member of the Glee Club and Chapel Choir. In what little free time he had, Bob could be found plucking his guitar or playing his stereo. Bob is usually quiet and reserved, yet under this conservative exterior is an appealing personality, which, combined with his winning smile, has won him many friends who will remember him in the years to come.

Ed came to the Academy via the Naval Academy Preparatory School. A "dyed-in-the-wool" Rebel, he hails from the deep South. After numerous battles with the "Steam" Department and the Academic Board plebe year, he settled down to a normal, but not uneventful, existence at Navy. He was very active in intramural sports and held down the infield on a Brigade Championship softball team. Sports were not his only interest, though. Ed has followed the old Navy tradition of "a girl in every port", plus a few. Ed's will to win makes him a tough competitor on and off the playing field. Ed is slow-talking and congenial and can get along with anyone. He is quick and unfailing to cheer up a depressed friend with a joke or a kind word of encouragement. He was quite impressed with the flying program second class summer, and upon graduation he will endeavor to enter this phase of the Navy. 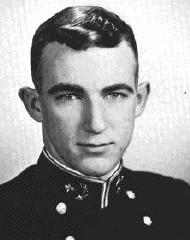 Bernie came to the Academy after a year of preparation at St. John's University in New York City. The rigors of plebe year proved to be a testing ground for Bernie's sparkling personality and found him very well liked by the upperclass as well as his classmates. He was a center of activity at every shower party or company celebration, and his carefree practical jokes were a mixed blessing to his classmates. Athletics were a major part of his well rounded personality for he played many company and battalion sports. Bernie never worried about academics, but he seemd to do better than most. Surely graduation will find Bernie a popular and welcomed addition to any unit he may join.