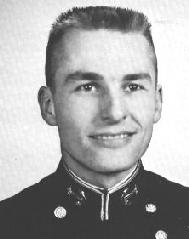 John hails from Wausau, Wisconsin, and came to the Naval Academy direct from Wausau High School where he stood near the top of his class and participated in numerous extracurricular activities. Being from the northern wilderness, he naturally enjoys skiing, both on snow and water. He is also interested in photography, golf, travel, and music. Sports-wise, John rowed crew and played intramural squash and volleyball. He is a conscientious worker and did well in his academic courses, having taken several elective courses in additon to the regular curriculum. He also was a Sunday School teacher at one of the Annapolis churches. With his winning smile and vibrant personality, John has won many friends and is admired and respected by all who know him. John can look forward to a bright future, for he exhibits the qualities and attributes which will enable him to succeed in any career he chooses. 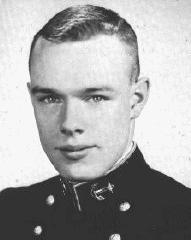 Brian came directly to the Naval Academy from Crosby High School and had little difficulty adapting himself to the rigors of Navy life. Academics were not his only preoccupation and rarely a weekend passed when Brian couldn't be found engaged in his favorite activity -- photography. In addition to being on the staff of the Log, he was a member of the Photo Club, WRNV, and company representative for the <I>Lucky Bag</I>. Having a firm desire to do well, Brian has been a staunch supporter as well as active participant in intramural sports, especially soccer and fieldball. His kindness and warmth of personality were reflected in everything he said and manifested by his continually going out of his way to help others. Brian's combination of congeniality, intelligence, and friendship will carry him on to a successful career in the Navy.

John is an easy-going fellow with more nicknames than you can count. He arrived at U.S.N.A. from a small New England town with a population which barely equaled the number in his incoming class. Pete was quick to win friends with a ready smile. Having been brought up along the Maine coast, his primary interests lay in the water as could be witnessed by the amount of time he spent on or in it. He was quite active in the photo club, and with the pursuit of the other necessities of life -- wine, women and song, he had much to do during his spare moments. It is certain that John's future will be closely linked with the sea and that he will be happy in anything he does.