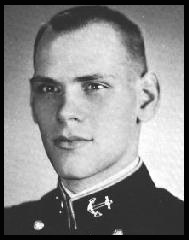 After graduation from Fenwick High School and a year at Wright Jr. College in Chicago, Joe came to USNA. He found that academics came easy to him, and so he wore stars and majored in math and physics. Joe was known as "Polli Pad" for his odd habit of sleeping during study hour and studying after taps. His interests are many and varied, and while at the Academy he worked avidly with WRNV and the Log. In the sports department Joe rowed battalian crew, and played battalion football, company softball, and battalion handball. His professional interests lie in a line pointing to nuclear subs. Of his other interests, girls ranked high, as he usually had four or five on a string. Joe's friendly smile and academic assistance will long be remembered by his classmates. This "son of the Windy City" is sure to have an outstanding career. 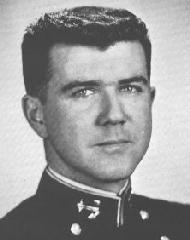 Jerry came to the Academy after joining the Army and attending the Naval Preparatory School at Bainbridge, Maryland. He graduated from St. Columbkilles High School with a class totaling four people, where he played basketball, baseball, and hookey with fair success. Academics were not particularly easy for Jerry, but he worked hard and found time to sail in a couple of ocean races to Newport and Bermuda. Though he was not a frequent "dragger" at Navy, he made up for lost time on weekends and leave with good times and spirited parties in the company of some young femme. Jerry's winning personality and casual sense of humor have made him a host of friends throughout the Brigade. His plans for the future are undecided, but all who know him are certain that Jerry's genial nature and perseverance will take him far towards success.

Dirck left the windy plains of Kansas after spending two years at Kansas State University. His friendly, affable personality has secured him numerous friends, and upon meeting him one could hardly forget him. Dirck always managed to see the bright side of life, and his sense of humor found expression in impromptu cartoons. Dirck never lost sight of the serious side of life or of his objective. Books never presented a problem. His spare time was amply occupied by the "Log and Splinter" staff, the antiphonal choir, and the Italian Club. He was a mainstay for numerous company and battalion sport squads. Of lesser importance but of equal notoriety was his fame as a party boy. Dirck's goal is a service career preferably in aviation. His determination and hard work will insure him of success.