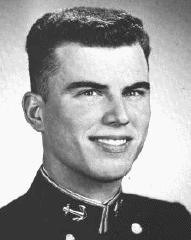 Bob, a native of Hyattsville, Maryland, just outside D. C., came to the Academy from Priory High School. At Priory he was active in track and has continued to participate in intramural track at the Academy. Bob also enjoys swimming, water skiing, and beach activities in general. On a summer weekend you can usually find him on the beaches of Ocean City. Although Bob (nicknamed "Ernie" by his close friends) is not a frequent "dragger," he does not lack for popularity amongst the fair sex. Living so close, he can easily make it home and back on Saturday night. Bob is a friendly easy going person, and these traits are sure to take him far in the future. 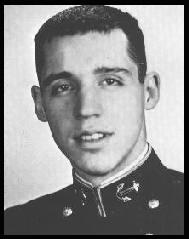 When Jim left Saint Xavier High School for the Naval Academy, he carried with him an impressive scholastic and athletic record. This record he maintained in spite of plebe year and tough USNA academics. As a fourth classman "Jimbo" worked as company Log representative and was a mainstay on the plebe lightweight football team. He continued to excel at intramural sports, his specialties being football, volleyball, and basketball. In addition to this his consistently good grades helped place him on the Superintendent's List. Although most of his time in "Mother Bancroft" was occupied with studies and sports, Jim displayed his fun-loving good humor on many weekends in many ports. Looking forward to his commission in Navy Line, Jim can be sure of both success and the respect of his classmates throughout his career. 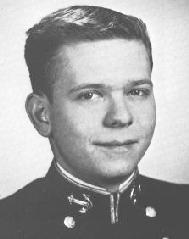 Ben, or "B. D." as he is called by his friends, came to Navy from Logan, Utah, with an outstanding record in high school. As a result of this, academics never posed a great problem for "B. D." His sense of honesy and fair play made him well-liked. His winning ways with the young ladies were thoroughly tested and found to be of highest quality, yet the ladies were never able to get the best of him. During his free time, Ben could be found studying the sciences. With this background he plans to enter Nuclear School and a career in the Navy. Ben will be a welcome addition to any duty station and will take his place among the future greats of the Navy.