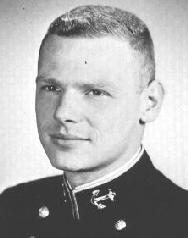 Phil came to the Naval Academy after two and a half years at Colorado University where he was a member of Sigma Phi Epsilon. Thus the transition from fraternity life to plebe year should have been particularly hard for Phil; however, he took it all in stride. As a youngster Phil was the company Log representative. He was a mainstay of the company sports squads, especially softball and lightweight football. In other company activities, such as parties and posters, Phil was particularly outstanding. He was usually called on to emcee a party, as he seemed to have quite a knack for that sort of thing. His talent for singing and imitations never failed to make a great show. More than any of these qualities, however, Phil's classmates will remember him as a fine person. He never failed to go out of his way to help a classmate. Phil's sincere interest in others, coupled with his fine personality, will pave the way for a particularly fine and rewarding naval career. 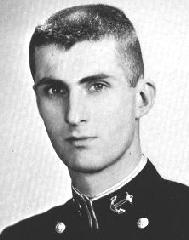 Walt, like many of his classmates, came to the Academy right out of high school. As soon as he got here, he started his road for perfection. In everything that he did, he worked hard, but always got his 10 hours of sleep. Forsaking his basketball experience, which he received at Coshocton, Ohio, Walt applied most of his talents to intramural football and softball. Throush his excellent playing and sportsmanship, Walt was soon one of the best in his field and helped his teams win many championships. Academics were never a big worry to Walt. Although he often started off low, by the time of exams, he was never in any trouble. The plebes will always remember him as the conginial host who asked them many questions and then stimulated their minds with a little extra instruction in physical education. Walt's preciseness and energy are sure to win him friends and a successful career. 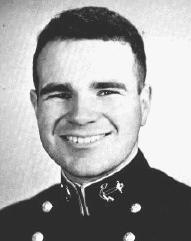 His ability to sail through all snares unruffled makes Runk a truly adaptable person. His mild manner seemed a disadvantage plebe year for some unknown reason, and he always got that extra little bit of attention. Able to get along with anyone or anything, he could always be found in the pad before any P-work or exam. In spite of this, his natural talent in engineering subjects, especially those concernied with electricity, always brought him through with a respectable average. We are sure that he will make a fine Naval Aviator.