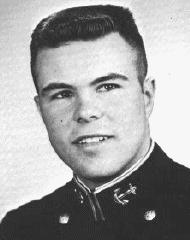 "Big John Ryan", as he was known to his roommates since plebe year, is a typical smiling Irishman from New England. Coming to Annapolis from Beverly High, John continued the athletic and scholastic prowess that stood him in such good stead there. By playing on the plebe basketball, football, and baseball teams, on the varsity basketball and baseball teams, and by singing in the Catholic Choir, this good fellow became well known and liked by all his classmates. The description "traveling man" never fitted anyone more perfectly for John left his tracks from Hawaii to Paris during his summer leave periods, and this promises to be a pastime that has just begun. Our best wishes follow John in the Fleet's air arm, and the best of luck to all young ladies with designing interests in him. 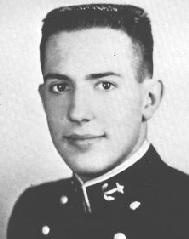 With a good nautical background from the rockbound coast of Long Island Sound, Pete came to the Academy straight from high school. The "master of all trades" of the Seventh Company, he was always willing and ready to help any of his classmates with their problems. His academic routine rarely gave him a free study period, since Pete took at least two overloads a term since the start of the elective program. Pete, an ardent sailor, was a member of the varsity and plebe dinghy sailing teams. He was a valuable member of his company winter cross-country team as well. Nearly every activity and club in the Brigade could claim his active participation: NA-10; Drum and Bugle Corps; Concert Band; WRNV; W3ADO, our amateur radio club; the Photo Club and the Gun Club. With a start like this, there is no question in anyone's mind that Pete is going all the way to the top. 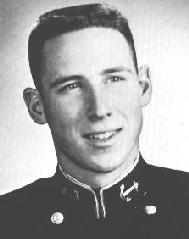 Hugh, better known as Elwood or "Duck," brought his spirit and ability to the Academy from Aspinwall, Pennsylvania. A standout in football and basketball in high school, Elwood retired these sports and began another entirely new to him. His first time with an oar was March of his plebe year. Through hard work and ambition, he became a member of the plebe crew team and the boat which came in fourth in the Olympic trials. He also made the first varsity boat his youngster year. In the winter months he devoted his time to the betterment of the company football teams. Well liked by his classmates, Elwood was always ready for a good time, whether a party or a plebe-ho. His outstanding personality promises his to be an enjoyable and fruitful career in any field.