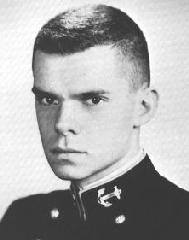 Miles' time at the Academy has been for a worthy cause, for it has exhibited that Westfield's loss was definitely Navy's gain. Hard work and diligence was the philosophy Miles used to maintain a Superintendent's List average and show his athletic ability. The enjoyment received from his efforts in varsity cross-country and track are evidenced from the maximum effort he put into them. Also, Miles has used much of his leave time to participate in Pentathalon and Triathalon conferences about the country. Although rather sincere in nature, his very subtle sense of humor has provided many humorous occasions and will undoubtedly account for many gay recollections in later life. Friendship and ambition have never been obstacles in Miles' life, so the only limit to his future aims is the goal he sets his heart and desire to. 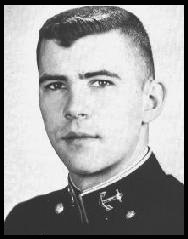 Coming straight from New York's Colonie Central High School, Lu began immediately to absorb anything and everything the Academy could offer him in preparation for his commission in the USMC. He won stars in each of his four years although youngster year, Lu modestly neglected to wear them (mainly because no one told him he rated them). He will graduate with a major in German and hopes to obtain his MA in that subject. His extracurricular activities included the writing of numerous articles for the Trident Magazine and the mastering of the engine room skills on the Academy YP's. None of those who know him, can doubt that Lu will make good use of the opportunity offered him by the USMC. He should prove a great asset to the organization whose emblem is proudly displayed on his Academy ring and a credit to the Academy. 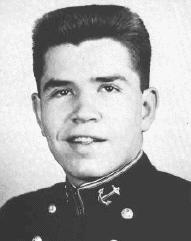 From the heart of the Magnolia State to Marion Institute, then to USNA comes this rebel. Because of the way he pronounced "jelly" he became known as "jelly". During youngster year Austin was known to appear in the most unusual places and it was rumored that his favorite hiding places were in empty lockers. He always enjoyed a good party or a good dance. Austin contributed his vocal talents to the hospital choir, and also participated in the Forensic Club. Just as the Confederates fought the war with determination, such was his attitude while participating in scholastic or athletic events. His motto was; "A quitter never wins and a winner never quits." Austin's high ideals and gentlemanly qualities will be quite an asset to Naval Aviation and to the country which he serves.