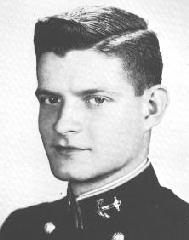 Upon arrival at the Academy Tom entered whole-heartedly into the activities of plebe year. He spent long hours working industriously to increase his knowledge of the Naval profession. He joined the Musical Club Show and became well known for his portrayal of Squeemish Bronco McGreedy in "The Land Grabbers," during his plebe year. One also had the opportunity of hearing his New York accent every Sunday as he sang in the Antiphonal Choir. Tom did his best youngster year to take advantage of the free time offered him. He worked on public relations, giving personal guided tours to a number of young ladies during the weekends. Second class year, however, found him devoting his time to academics. Those men who have the opportunty of serving with Tom shall find him an asset to any ship or station. 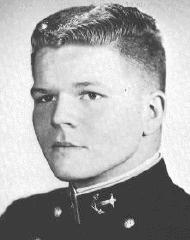 "Nick" came to Crabtown after completing his high school education at Mount St. Michael Academy. "Nick's" leadership ability can be traced back to his outstanding high school record, when he was Student Council president and co-captain of the varsity football team. Although his interests have changed slightly, he is still as popular and jovial as ever. Varsity lacrosse takes up most of his time in the fall and the spring. His free minutes during the winter are spent reading a good book or listening to his favorite record album. "Nick's" easy going personality fit in well with his recent home in Manasquan, New Jersey. The love of the water which he has developed on the sprawling beach will blend well with his life in the Navy. We wish the best for "Nick" in his future career. 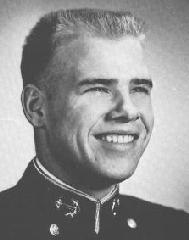 Matt, born into the military life, entered the Academy from suburban Virginia. Since then he has excelled in various fields, among them mathematics, 150 pound bootball, and enjoying himself. He was endowed with more than his share of coordination, which enabled him to star on the varsity 150 pound football team along with intramural sports in the winter and spring. On the exterior, Matt, with his sharp tongue, caustic wit, and outspoken manner, camouflaged the understanding, congenial manner which his close friends associated with him. Besides football, Matt was also very serious about his academics and particularly helpful to any classmates who were puzzled over the following day's assignment. Finally, Matt was an admirer of the feminine gender, putting it mildly. His manner was frank and his actions positive, and this attitude carried into the Fleet will certainly reward him with a successful career.