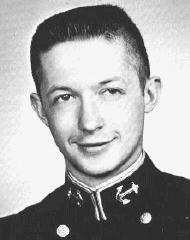 Mark was born in Dayton, Ohio, on 22 April, 1940. He graduated from Xenia High School where he demonstrated abilities that will make him a success in all that he undertakes. Mark is a sports enthusiast and at Xenia he showed his potential by lettering in track. Upon completing high school Mark attended Otterbein College for a year where he was a member of Pi Kappa Phi and the Glee Club. At the Academy Mark continued to demonstrate his interest in sports by running for the plebe cross-country and track teams. Also during his plebe year he was a member of the Concert Band. Active in company intramural sports as well, Mark still found time to get in enough studying to maintain a very respectable academic average. Interested in all types of music, he is partial to jazz. With a ready smile, Mark was well liked by his classmates. This Ohio lad cannot help but succeed in all of his undertakings. 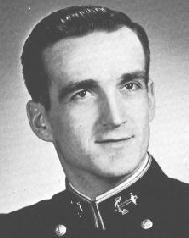 With roots in the country around Osage, Iowa, Ron has sprung to a lanky six foot, three inches, and a terror on the wrestling mat. He moved West with his family, attending high school in Venice, a suburb of Los Angeles, and spent two years at Santa Monica City College. His age and experience gave Ron an edge on most of us in the area of salty tales. But for one thing, female companionship, one could say that wrestling is Ron's greatest love. Not having wrestled since he was twelve back in Iowa, on arrival at the Academy, he readily assumed the number one position of the heavyweights on the plebe team, and vaulted into a very successful varsity career. A quick and level-headed thinker, Ron has seldom met a challenge that he could not lick or an argument that he could not win. With the admiration and friendship of his classmates, Ron leaves the Academy to begin his career in flying. 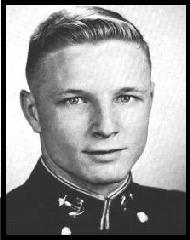 Rog hails from Huntington, Long Island where he attended Huntington High School. Coming into the Naval Academy right out of high school, he immediately exhibited his athletic prowess by his participation on the plebe gymnastics team. Gymnastics remained his major sport throughout his four years at the academy. His academic endeavors equal his athletic ability in that he consistently maintained an excellent standing in his class. Rog's personality is revealed by his constant striving for higher goals through hard work with no loss to Brigade spirit or willingness to help others. His ambition and drive earned Rog many friendships which will remain lasting and rewarding. The branch of the service which he chooses will be gaining a loyal and hard working officer.