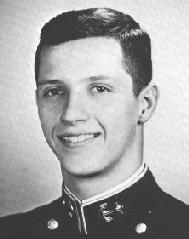 "Thrash" is a man of many virtues, the most pronounced of which is his unique ability to get along with his fellow midshipmen. His warm smile and easy-going personality are always welcome in a group. Although not a brilliant scholar, he manages somehow to find time besides his studies to involve himself in several pastimes. Known throughout the class and possibly even the Brigade as the handy man, he delights himself in taking apart electronic and mechanical apparatus to see what makes them tick, sometimes even fixing them. Physical fitness is another of his interests, and he best achieves this by his year round participation on the varsity heavyweight crew. He was a member of the respected '60 Plebes who rowed their way to fourth in the Olympic Trials. Hard work and a genuine personality will make Craig a success in his future endeavors in the Service. 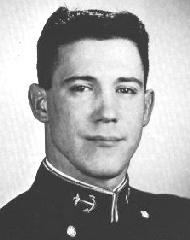 George came to the Academy from the Fleet and a year at Johns Hopkins University. The transition from a seaman to a plebe wasn't quite as hard to him as to others, as he was used to the discipline of Navy life. He had several hobbies which included music -- mostly jazz, and reading. Being a music lover he played the piano quite well, using his own arrangements. His biggest asset was lacrosse, for he had several years experience previous to entering the Academy. George was the stalwart on the plebe and varsity lacrosse teams, playing the frontline attack each year. He was a good friend to all those who know him and would go out of his way to help anyone. His plans for the future are unknown but it is certain that he will excel regardless of the branch of the Navy he enters after graduation. He will make a fine officer and will gain the respect and friendship of all those who will work with him and under him. 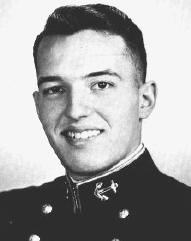 Strong with the knowledge that the Navy of iron men and wooden ships was the life for him, Dave set his sails on a career as an officer and competed in the Fleet-wide competition for an appointment to the Academy. Upon successful completion of the Naval Preparatory School at Bainbridge, Maryland, he entered the Academy. During his four years at the Academy, Dave's devotion to his chosen career and burning desire to make a success of it caused him to work long hours. Only occasionally did he allow himself the rest and relaxation he so richly deserved. Most weekends he could usually be found in his room studying. Having taken advantage of the opportunity offered him, Dave is certain to be a capable mariner. Beyond that, however, Dave has an easy-going, friendly manner that will make it a plesure to serve with him.