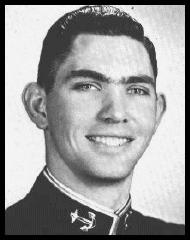 Clyde, or Van, as he is known to his many friends, came to the Naval Academy from Norfolk, Virginia. Being a Navy junior, Van was something of a world traveler. During his stay in France, he became acquainted with the sport of fencing, wherein he distinguished himself during his stay at the Academy by winning a varsity letter. His proficiency in academics was also demonstrated by his frequent appearances on the Superintendent's List. Not all of his time was spent studying or fencing, however, and Van could always be counted on to make an appearance at many of the social functions in and around the Academy. Van's wide background and his many interests, coupled with his inquisitive mind and outstanding personality, will make him a valuable asset in whatever he undertakes. 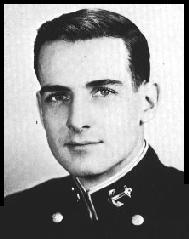 After a year in electrical engineering at Villanova, Ned came to the Academy. Under the new validation program he started with advanced courses and finished with a major in electronics. Despite his busy academic schedule Ned made time for many school activities. He was a sports announcer for the Public Relations Committee, a four year Hop Committee member, being chairman of the 2/c Ring Dance, and a tenor in the Catholic Choir. Other interests included a well filled address book which resulted in an intricate point system for the selection of a June Week drag. Ned was a staunch backer of company sports and a member of the "First Base Club". His leadership, tact, and friendly manner, coupled with a driving ambition, will assure him both friends and success in his career in the service. 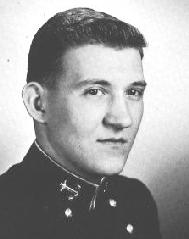 Walt came to USNA from the windswept plains of Kansas and will always be remembered for the pride he has in his home state. Nobody could say a thing against Kansas and get away with it while he was around. During the winter afternoons he could be found around MacDonough Hall getting in shape for Brigade Boxing, and in the spring and fall he was an avid supportuer of company and battalion sports. Walt was active in the Newman Club, Public Relations Committee, and German Club as well as being a member of the Masqueraders' prop gang. No one woman could ever pin Walt down and he was rarely seen with the same one twice in a row, much to the dismay of all females that knew him. Upon graduation a career in the Navy awaits Walt. He is bound to be a success in anything he undertakes.