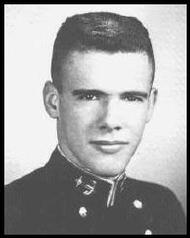 David's slow drawl and pleasant smile marked him as a true son of the Lone Star State. He was always ready to help a classmate with the more difficult parts of the assigned lessons and his dry, sometimes sarcastic humor helped to keep spirits high. Dave's philosophical comments on the annoyances of life were sometimes thought-provoking, but most often they brought a burst of laughter. As an active member of the ocean sailing team, "Gitano" the gypsy, sailed to various parts of the eastern seacoast, making it possible for members of the weaker sex to become acquainted with this easygoing midshipman. Dave's interest in writing produced occasional visible results in the <I>Log</I>. In the future the Naval service will greatly benefit from Dave's thoughtfulness and fidelity. 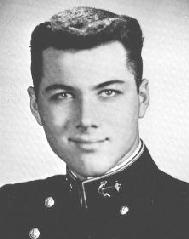 An artist who has a wealth of talent is Dick Whalen, hailing from Arlington, Virginia. Athletically he has added his two years high school varsity experience as an end to his winning battalion football teams. Taking time from his studies, he has applied his productive artistic talents in carrying a slave's load of work for the Log, designing covers, Navy's Men, or applying his inescapable humor to the invention of cartoons applicable to the daily life of each midshipman. Girls pinned to his classmates wear the class crest which he designed and considers his best work, although he has dominated Trident contests in all modes of artistic expression. Born into a Navy family he is an advocate of anything that moves rapidly - planes, cars, or wild dances. Dick will be remembered as a man of indefatigable happiness and expressiveness. 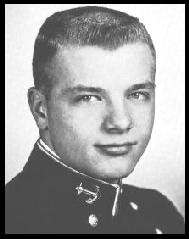 Ted came to the Academy upon graduation from Huntington High School in New York. Arriving with the knowledge that U.S.N.A. was the only place for him, he demonstrated his vast abilities by excelling in every manner possible. Ted's leadership qualities and friendly personality brought great respect to him in the Hall and on the athletic field where he was an outstanding member of the varsity lacrosse team. There is little doubt of the great success which is in store for Ted. Whatever his choice of service, they will be gaining not only a fine officer but also a fine man. The Class of '63 can be proud to have had him as one of its members.