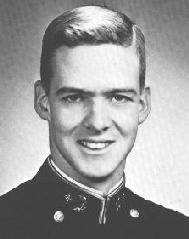 Pete was born in North Carolina but moved to New York when he was four. After graduation from Cardinal Hayes High School, Pete entered the Academy, where he found time to participate in Lightweight Crew, Catholic Choir, and the Public Relations Committee. Among his many and varied interests, Pete enjoyed good music, the theatre, and travel. As a member of the nineteenth company "contest club," Pete won a few checks with which he intends to purchase status symbols when he graduates. During dull moments, Pete's subtle sense of humor added much to the well being of all. With the desire to become an admiral and with the ability to do it, Pete should have no trouble in future years. 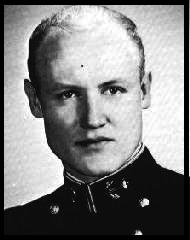 "V.G." came to the Academy after completing one year as an engineering major at the University of Massachusetts and was able to validate two of his plebe year courses. Coming from an Air Force family, "V.G." had no trouble making the adjustment from a civilian to a military school. During his plebe year most of his extracurricular time was devoted to ocean sailing. Vern's good sense of humor and his easy going nature insure his success upon graduation. 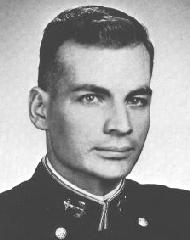 After several switches of residency early in his life, Bill finally was able to adopt Salt Lake City, Utah, as his home town. His high school days were spent at Olympus High School in Salt Lake City. Following high school, Bill immediately enlisted in the Navy. During the two years, Bill was stationed at New Yourk and at Dam Neck, Virginia, where he attended the Naval Guided Missile School. After graduation from NAPS, Bill then entered the Academy. While at the Academy, Bill rowed crew, took part in Russian club activities, and pursued his hobby, handball. After graduation we are sure that Bill will be a welcome addition to any wardroom in the Fleet.