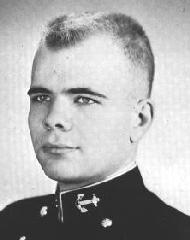 Dave, who hails from the Prairie State, traded for some unknown reason the carefree life of the University of Illinois for the rigors of the Naval Academy. He met the challenge with his easygoing manner and quickly became involved in academics, concert band, choir, and intramural athletics. Four years on the Severn went by quickly, and before he knew it, he was throwing pennies at Tecumseh for the last time. Outside of girls, Dave's favorite topic of conversation was usually submarines. His personality and desire to do his best will make him a success in whatever he undertake

Bob attended Columbian Prep School in Washington, D.C., after graduation from high school, where he was class president. As a plebe, Bob found time to play football and baseball, putting his experience as high school captain in each sport to good use. He also became a member of the Newman and Spanish Clubs. Youngster year found Bob turning his full attention to baseball, where his efforts on the diamond helped win many a ball game for the Navy Nine for the next three years. He also gave much of his time to his company by participating in company football and basketball. Bob has found his four years at the Academy very rewarding both in academics and extracurricular activities. His easygoing manner and sense of humor have won him many lasting friendships. Bob's main interests while at the Academy have been good music, interesting books, and taking care of that special female back home. 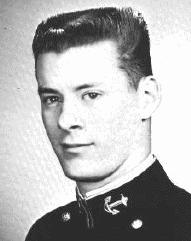 Bill, a quiet, unassuming fellow from Burbank, California, came to the Academy directly from prep school. During his four years he spread his time between academics, intramural sports, and the winning of contests which have netted him a considerable sum of money. Bill's chief outside interest was hot-rodding, a natural interest for a Southern Californian. At the Academy, Bill claimed the flattest "flap-top" haircut, one of his many achievements. Upon graduation Bill plans to seek duty on the west coast. But wherever he goes, we are sure that he will continue his winning ways and become a great success in the Fleet.