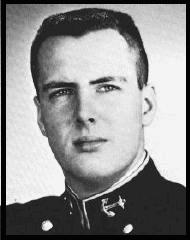 Big man on campus, six-foot seven Art Clark, set sail for the Academy from nearby Baltimore. Although an asset to any basketball team, Art stuck with his first love, swimming. Art's zest for casual living soon affects anyone who comes in contact with him. With his quick mind and ready wit, Art attacks any situation with enthusiasm and interest. Art maintained an active membership in WRNV and was advertising editor for the Trident Magazine. He was also interested in music, though sometimes his ability with a Uke was questioned as musical. With his ready smile, hard work, and perseverance, Art should be a valuable asset to any organization into which his course may lead. 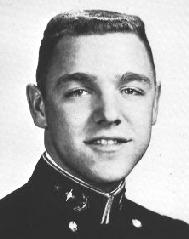 Steve, or "Stevie B.," as we know him, entered the Naval Academy after graduating from high school in the land of mules and corn cob pipes, better known as Missouri. Steve never had time to be smoking the old corn cob pipe in Bancroft Hall, because he was too busy trying to beat the academic departments. Evidently, he found some degree of success in this endeavor, being constantly on the Superintendent's List and a wearer of "Stars". This he did without studying as much as the rest of us. Academics were not the only thing that came easily to Steve. Though small in stature, he was a fine athlete who lent his strong right arm to the varsity tennis team each year and excelled on the company basketball team during the winter months. The "Show-Me" state's contribution to the Navy has definitely shown us. 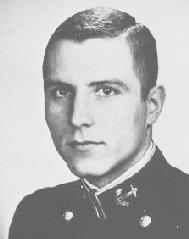 Jack helped to prepare himself for Annapolis by a year's stay at The Citadel, A fine athlete in high school, he continued to do well in athletics as well as in academics at the Academy, though he made no special claim in regards to his proficiency in plebe and youngster Russian. During his four years Jack was a tennis enthusiast in many of his off hours. Furthermore, he did a fine job on the Hop Committee during plebe year. The company basketball team will miss Jack as will his many classmates who had the privilege of knowing him. Jack will always be an asset to any command that he serves.