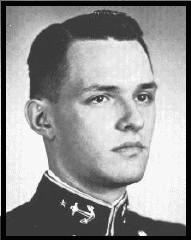 Gary was one of the natural "non-sweat slashes" to whom his classmates rushed for help. Coming from Lynn, Massachusetts, he retained a distinctive New England accent. He came straight from high school and always did very well at the Academy. His extracurricular activities consisted of writing letters to his girl and winning contests. He spent his four years bolstering the spirits of his intramural sports teammates. Upon graduation, Gary plans to continue in the nation's service as a member of the "Aerospace Team." 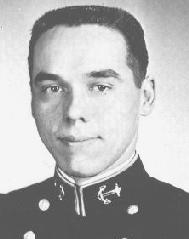 Bernie, better known as "Bernus," has made USNA a much livelier establishment during our stay on the Severn. Always quick to join in both the work and play-mostly the play-of academy life, he has gained many friends. Bernie never worried about the books too much but still stood well in his class. His biggest worry was in trying to find enough time to pursue his many interests, both academic and extracurricular. Affable and lighthearted in nature he usually found a way to brighten the dreariest of days. Yet amid all the fun there is a serious dedication in the character of Bernie which will always bc a great asset to the Navy. 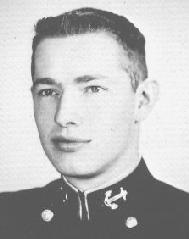 Tim entered the United States Naval Academy via a Congressional appointment, following graduation from Ramsey High School in Ramsey, New Jersey. He maneuvered through plebe year with a minimum of scars, and soon was known as one of the friendliest men in the Brigade. Although he quickly adapted to Maryland, he never let his love for New Jersey die, and he was often heard expounding on her many fine points. Tim spent much of his time on the athletic field, competing for his company in football, softball, and volleyball. His interest in politics helped make the English, History, and Government Department his favorite. Throughout his four years at the Naval Academy, Tim maintained a good academic standing, although he was afforded much opposition by the Science Department. However, he never let his studies interfere with a good bridge game or discussion. Being an avid follower of sports and politics, Tim is a good bet to contribute much to the wardroom conversation.