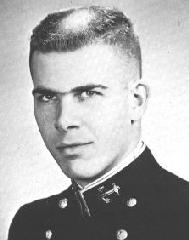 While at the Academy Mike has always displayed a most serious and dedicated attitude towards the various facets of Midshipman life. Residing in Detroit, Michigan, Mike started his military career early by attending Marmion Military Academy in Aurora, Illinois. After high school he spent three years as a mechanical engineering student at Michigan State. Because of his prior engineering experience, technical subjects came easy to him, however he had several encounters with the Russian and English Departments. He was a member of the varsity fencing squad and took great interest in the Rocket Club, too. Letter writing and photography occupied the remainder of his free time. All who know Mike realize his future potential as an officer in the Naval Service. 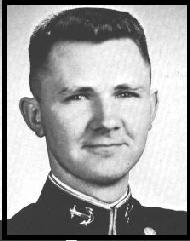 Dave, an Army "brat," came to the Academy on a Senatorial appointment from Missouri. Born at Fort Benning, Georgia, Dave would rather call St. Louis his home. An avid model railroader, he was always investing his "monthly insult" in new locomotives. By the time he became a second classman, Dave had attained the position of Vice President of the Portuguese Club. He gave a good showing as a member of the Dinghy Sailing Team, while also playing battalion tennis and company cross country. One of his brightest memories at the Academy was winning an Army B-robe from his brother at West Point. Dave's good humor and pleasant disposition will pave the way for his success in the fleet. 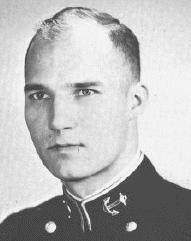 A life-long ambition was fulfilled when Frank left his home town of Norfolk, Virginia, and entered the Naval Academy. His four years on the Severn were spent in many industrious activities ranging from sports to those quiet Sunday mornings talking to his "One and Only" on the telephone. "Gymnastics rates high as a sport of physical coordination and dexterity," says Frank. He saw action on the plebe gym team as well as the varsity team. Pursuing academics to the fullest extent, Frank attained the Superintendent's List many times. Engineering was Frank's favorite subject as exemplified by his taking full advantage of the Engineering elective program. Also a member of the Honor Committee, Frank's many activities proved his versatility in many different fields. We could always count on him for help in any task that would come up.