Graduating from high school in 1955, Jim is certainly one of the oldest members of the class of 1963. Before coming to the Academy, Jim filled his time by enlisting in the Navy. After completing recruit training in San Diego, California, Jim was stationed at the Los Alamitos Naval Air Station in Long Beach, California. He then attended the Guided Missile School in Dam Neck, Virginia. From there, he went to NAPS, where he remained until he exchanged his rate as a guided missileman third class for that of a Midshipman. While at the Academy, Jim participated in intramural squash, fieldball, and basketball, as well as, plebe and varsity squash. He also maintained an active interest in the Russian club. Come graduation we are sure that success will follow Jim wherever he goes. "Fish," as his classmates fondly called him, entered the Naval Academy after graduation from high school in Spokane, Washington. The good education he received there served him well during his four year stay at USNA. He did not spend all his time studying but made very good use of his spare time on extracurricular activities. He was a member of the Foreign Language Club and was also an active member of the Reception Committee. judging from the thank-you notes received from the different visiting athletic teams, "Fish" and his group must have really done an outstanding job. He also did his share on the sports program. On fall and spring weekends he was usually out with the sailing team. During the spring of plebe year he tried his luck on varsity football and in the summer of second class year he also participated in the Annapolis-Newport race. 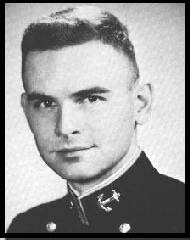 Hailing from landlocked Tulsa, Oklahoma, George had never seen a boat until his arrival at Annapolis. His past experience with the nuts and bolts of racing cars gave way to an interest in the rivets and beams of ship design and nuclear engineering. He may be remembered for the design of a certain ship, displacing 90 tons, 400 feet in length, and having a top speed of 55 knots. After academic hours, George could be found in the fencing loft with Coach Deladier's lancers. On weekends George became water-borne in one of the yawls or knockabouts. His insatiable interest in engineering, plus his ability to do a good job, well mixed with a lively sense of humor, should lead to a successful and rewarding career.