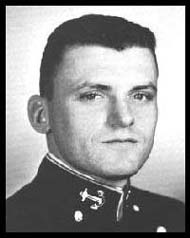 Curly came to the Academy after a two month tour of civilian life, following a three year hitch in the Marine Corps. As a plebe, lightweight crew dominated the better part of the year, with steam EI just behind. As an upperclassman, the French Club, company soccer, battalion squash, and battalion lacrosse made up his extracurricular activities, still followed by steam EI. Curly's vibrant personality will make him a hit wherever he goes. He has his sights set on a career in Aviation. Coming straight from Borger High School, this typical Texan with the booming voice was Texas gift to USNA. "Tex", a big talker with big ideas, made a favorable and lasting impression with his classmates. Although not a slash at academics, he made up for this lack by his winning ways with the young ladies. Plebe year found "Tex" devoting time to plebe fencing. He also was a member of the Gun Club, the Cannoneers, the hospital choir, the Portuguese Club and the automobile committee. An avid sports car fan, "Tex" could always be counted on to have the latest information from the auto world. Looking toward the future, Tex will be an outstanding asset to whatever service he chooses to make his career, 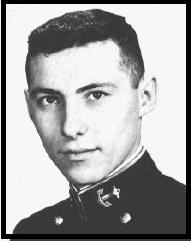 A native son and leading proponent of one of our nation's larger states (Texas to be exact), Abel made a very substantial contribution to the Naval Academy during his four years. Academically, he was very much at home in the mathematics, science, and engineering departments. His only nemesis was the venerable English, History, and Government Department, but his singular accomplishments in the other departments were more than sufficient to place him on the Superintendent's List. Abel was also an avid supporter of all Academy teams and an active and skilled participant on many intramural squads. His hard work and diligence on the squash courts were rewarded by membership on the Brigade championship teams. With such accomplishments as those behind him coupled with his inherent good nature, Abel will undoubtedly be a fine addition to the Navy Team.