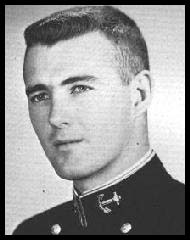 Vince is the unchallenged "Madison Avenue Cowboy" of the Class of 1963. He gave up football scholarships to Dartmouth, Princeton, and Lehigh in order to satisfy his yearn for the sea. He earned numerals in battalion football and played varsity golf at the Academy. His fine academic record is a good indication of his innate characteristics-determination and fortitude. His academic target is a master's in mathematics and there is no doubt that he will receive it, for whatever Vince does and wherever he goes success is sure to follow. 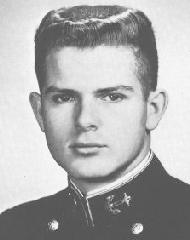 Roger, a Navy junior, came to the Academy straight from high school. Being a Navy junior, he has lived in several places, but he has always claimed Coronado, California, as his home town. Rog was e to get along with and his extracurricular activities included dragging. He was also on the REEF POINTS staff and culminated his efforts as Editor. During his four years he participated in intramural sports and the YP Squadron. Though he did fairly well with his books, he wasn't inclined toward the academic as much as toward the military-professional aspect of Academy life. We feel that he will do well in the Fleet and wish him "fair winds and following seas." 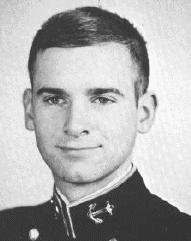 "Dave" brought with him a true party spirit from a year at Notre Dame, and though he often suppressed this spirit for the demands of academics, he always carried along the ability to be "one of the gang." Dave could understand a math professor's theoretical lecture and explain the sticky points to his classmates, which he was always willing to do even at the expense of his own work. Yet he was also the kind of person who could combine a down-to-earth attitude with his unusual ability with the books. He was a natural leader in a brigade of men. The girl who gets him will probably have to spend many hours agreeing to the virtues of northern Michigan, or tactfully defeating him at tennis, but she can also count on following him through an interesting and rewarding career.