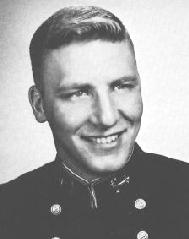 Jerry, a very sportsminded individual, was an enthusiastic wrestler. During his plebe year, he made the plebe wrestling team and in the ensuing years he joined other matmen on battalion teams. Waterpolo, volleyball, football, and fieldball were other challenges that he met with equal drive. One of Jerry's Brigade activities included working on this section of the <I>Lucky Bag</I>. We could. always count on him to help Brigade spirit along by pushing a paint brush around for those football posters every fall. Despite his many tasks, Jerry maintained a good academic average and especially enjoyed solving a tough problem in mathematics. All of these assets describe Jerry Harken, and coupled with his witty personality, they are sure to make Jerry a fine asset to the Service and his commanding officer. 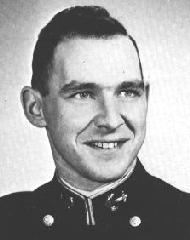 Bob came to the Academy from the backwoods of Maine, complete with a "down-east" accent, after completing three years at the University of Maine. His activities ranged from debating to dragging every weekend of his last three years at USNA. In the field of sports, Bob was a key member of intramural basketball, squash, and fieldball teams. In any free moments when not dragging, he could be found in his pad resting his head on an advanced chemistry or physics book, studying these courses by his unique osmosis system. Bob was very active in the Newman Club as well as in Forensics Activity. We all will remember him for his combination of sincerity and wit. He was a true friend to all who knew him and never refused to give much-needed aid on an insoluble skinny problem. Bob will do well in whatever endeavor he pursues after graduation.

Dan with his Irish wit and sparkling personality was able to, win the admiration and friendship of all. For most people, to be able to graduate number one academically would require complete devotion to their studies. But this is what made "wake-em-up Willie" so outstanding. If he was not found on the varsity pitching mound throwing Navy into national esteem, he would be found balancing out our class treasury, lending helpful advice, or participating in his myriad extracurricular activities Many of his classmates owe their diplomas to his continual tutoring. One would never find the Deacon in an argument, for he would quickly win you over to his side. Dan brought his athletic success into his social life, by playing the field. With Dan's persistent enthusiastic determination and uncanny sense of doing well, success is sure to remain with him.