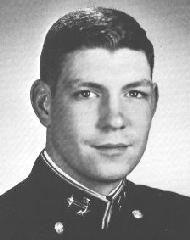 After attending Coffeyville College for a year, Tom decided to make his place in the sun at the Naval Academy. Tom didn't have much trouble with academics except that he still shudders every time he walks past the Foreign Languages building. Most of Tom's time was spent working on his mathematics degree; however, this didn't stop him from being the crew team manager, and becoming a member of the Officer's Christian Union. Tom also found time to teach Sunday School in Annapolis. Although he seemed to worry all the time, Tom was always ready with a clever little joke when his roommates were feeling bad--or good. Whichever service Tom chooses, Supply Corps or Civil Engineering Corps, he is sure to be a great success. 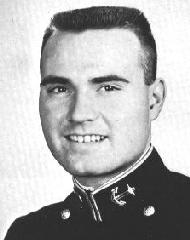 Don arrived at the Academy after spending a year with the Buckeyes of Ohio State. Although a solid foundation in academics enabled him to validate most of plebe year academics, he found it impossible to validate plebe year entirely and, at times, probably thought, "Why-o, Why-o, did I ever leave Ohio." But youngster year found Don a year ahead of his classmates in academics, and feverishly studying for a major in the social sciences. Far from being a one-sided man, Don's competitive spirit and athletic abilities were demonstrated in many battalion and company sports, and his leadership and organizational talents were felt in the NACA, OCU, and Foreign Relations Club. On weekends, Don switched from student to Sunday School teacher. With all these activities he still managed to keep his social life flourishing. Whatever part of the Navy Don chooses, his proven capabilities will serve well his country, the Navy, and his shipmates. 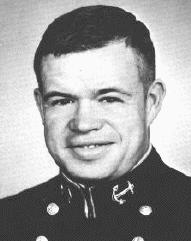 Major hails from Miami Senior High School where he lettered in both football and track and was class president. Before entering the Academy he attended Columbian Prep School and received his appointment through the Naval Reserve. As a plebe, Major was a member of the football and lacrosse teams and helped both teams complete fine seasons. During youngster year Major continued his sports activities, although hampered by injuries, and was an outstanding asset to his squads. Academics were a challenge to Major which he met with above average grades. While not participating in sports or studying, Major used his time to play golf. His interests outside of Academy life are water skiing, hunting, and fishing. Major has found his four years at the academy rewarding in sports and academics. His commanding personality and good humor have earned him many friends.