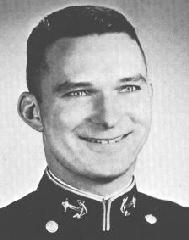 Having attended Purdue University for three years, George decided to come to the Naval Academy and leave his home state of Indiana. Being an enthusiastic person, George has worked very hard during his four years. We often found George out on the field with the junior varsity soccer team. His interest in soccer did not stop on the field, however. Many a time George would be dissertating on soccer by making predictions and telling "sea stories". Plebe year was a busy one for George for he managed to make the plebe gym team and maintain his academics besides pursuing soccer and professional interests. Although Spanish was not one of George's main fields of endeavor, most of his first two years of study were in this subject. Enjoying most of his courses, especially those in engineering, he maintained a good average during his stay. George is an extremely dedicated man and indeed will provide the Service with an enthusiastic officer and leader. 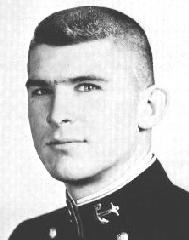 Two years of rugged engineering study at Penn State preceded Dave's admission to the Naval Academy. Having been captain of his high school wrestling team, Dave continued wrestling at the Academy. Consistently plagued, however, by one thing after another, such as a broken arm third class year, he was sidelined. Always a lover of the outdoor and vigorous life, he was able to stand very near the top of his class in physical education. The "Log" was lucky enough to have the use of some of Dave's organizational talents on the soliciting branch of their staff. Besides these other commitments, he always seemed to find enough time with the books to remain a permanent fixture on the Superintendent's List, while carrying an overload course in the science department. Dave's natural friendliness and willingness to help anyone in academic dilemmas have made him a very popular member of his class. 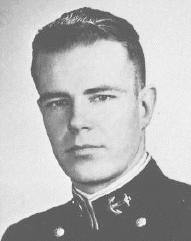 Hailing from Butte, Montana, Duke came to the Academy after a year at Montana School of Mines and a year at Montana State, where his major was automobiles, his one great love. With his good background, academics were no problem for Dick, that is after he had mastered the American language. Many hours were spent in building nameless little inventions which had no purpose. He could always be depended on to have correct answers to any math or science problems and was always willing to help anyone. Dick had other interests besides automobiles. He was a strong member of the plebe and battalion fencing team, and during the spring he could be found on the softball diamond. He was also famous for his June Week antics. He plans to fly after graduation and would like to turn his inventive mind to aeronautical engineering. Dick's winning personality and big smile will carry him forward in anything he should choose.