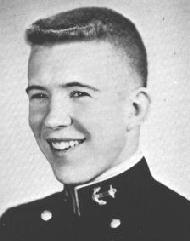 Born in Jacksonville, Florida, and raised in Macon, Georgia, Charlie was educated under that lofty Southern dogma that the South actually did win the War-Between-the-States. Even with this dubious beginning in life, he somehow aspired to the heights of the Naval Academy. As a member of the plebe squash team and intramural basketball, tennis, and squash teams, gym gear was always a part of his diurnal uniforms. In this athletic capacity, he aided the Eighth Company basketballers to forty straight defeats. Better remembered among his classmates for dexterity on the guitar, he provided many enjoyable hours of both quiet and riotous sing-a-longs. A literature major, he appeared on the Superintendent's List several times. His mild manner and friendly smile will always make him welcome wherever he goes in the Fleet. 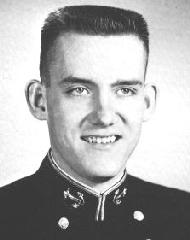 In these past four years we all have come to know Jerry as an enthusiastic and sincere young man upon whom we can rely in time of need. Jerry arrived at the Naval Academy immediately after graduation from high school. Having had a good background in math, Jerry decided to major in math while at the Academy by taking advantage of the validation and overload programs. Being an industrious and often zealous student, Jerry attained a class standing of which he can be quite proud. In addition to being an exceptionally good student Jerry also found time to become a strong 440 man on the varsity swimming team, a member of two Brigade championship water polo teams, and a dependable member of the <I>Lucky Bag</I> staff. Jerry's analytical mind, strong character, and unquestioned devotion to duty will be a great asset to both himself and his country. 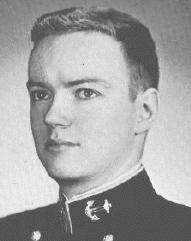 A midwestemer, Dick had never seen the ocean before he arrived here at the Academy to seek his career on it. He came straight from high school in Iowa, having spent all his life there and in Nebraska. The battle with academics began early plebe year for Dick, and continued throughout the four years, but he was the final winner, as a proud smile and a diploma attest. Dick, an avid sailor, sailed nearly every fall and spring aboard either dinghies or the schooner Freedom. Other interests included the Newman Club, Reef Points staff, and intramural sports during sailing off-seasons. A quiet fellow, Dick would tell you that his main interests over the last four years were the girl back home and professional subjects, both of which figure in his future. He plans on wearing the Navy Blue and Gold for a long while and perhaps the wings of a Naval Aviator, too. A welcome addition to the Fleet!