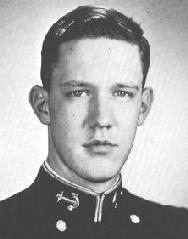 Keith was born in New York City, but he claims Washington, D.C., as his hometown. He came to the Academy after a year of college at the University of Maryland in Munich, Germany, where he spent his pastime enjoying the continental atmosphere of Europe. His favorite times are hunting, fishing, photography, and figuring out how to get back to Europe. Battalion swimming and lacrosse were among the several intramural sports he played. Keith's easy-going manner and readiness to smile should be a big help to him in the fleet. With four generations of service tradition behind him, Keith plans to make the Service a career. 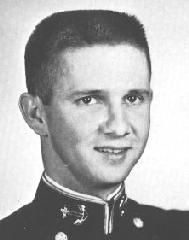 Ralph, a native of Missouri, came to us after two years at Missouri School of Mines, where he majored in mechanical engineering. "Ralphie," as his classmates are fond of calling him, combines good humor with a sincere attitude to make him one of the most popular men in the class. On the athletic fields, his aggressiveness and spirit made him one of the mainstays of the company teams. In academics, his major field was in aeronautical engineering. The Public Relations Committee occupied much of Ralph's free time. Occasionally he was to be found in the Model Club room building model airplanes. His special interests include flying, hunting, and girls. Whatever, service Ralph chooses, his cheerful good humor and friendliness will make him a welcome addition to an wardroom. 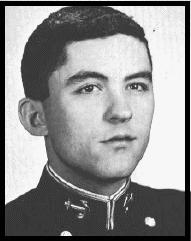 Max is truly a man who has come from the hills down to the sea. His love of the Smoky Mountains of Tennessee is exceeded only by his feelings for the wind and salt spray. Raised in Knoxville, he attended one semester at the University of Tennessee before enlisting in the Navy. After spending time at the guided missile school at Dam Neck, Virginia, Max entered NAPS and then the Naval Academy. Fall and spring afternoons would find Max out on the bay sailing either yawls or dinghies. On Sunday mornings Max added his voice to the many which made up the Protestant Chapel Choir. When asked, he would probably say his favorite pastime was association with young ladies and his main problem was getting enough sleep, but, if those who knew him were asked, they would no doubt reverse his statement. Max plans to make a career of the Navy-to be more specific, in submarines.