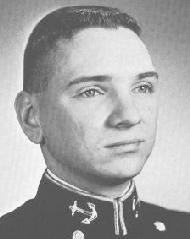 In four years at the Naval Academy, "Dangerous Dan" has proven to be not quite as dangerous as his nickname might imply. Yet Dan has had many memorable experiences. Plebe year found quiet Dan making himself scarce and keeping himself squared away. "The busiest year of my life," insists Dan. His career as an upperclassman was equally busy. He was on the Superintendent's List many times and took several elective courses. Dan was always a good student in German and took an active part in the German Club and its banquets. He has helped his company out on the cross country track, fieldball field, and in professional competitions at which he excelled. Spare time? What Dan has had of it he has spent at the movies, pursuing his hobby of electronics, and reading history or literature. In the future it is sure that Dan will definitely be an asset to the Service. 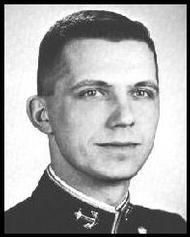 Carl received his appointment to the Naval Academy after one year at the University of Detroit, where he majored in engineering. Through his active interest in several extracurricular activities, Carl soon became a well-known and well-liked member of his class. The YP Squadron was one of his main pursuits, but even though it took a great deal of his time, Carl still managed to participate in the activities of the Radio Club. During the winters, the fieldball team always considered him an invaluable asset as their top goalie. At other times, Carl might be found struggling with a skinny assignment or catching a few minutes of pad time to the accompaniment of a few old Polish records. Definitely sold on Navy line, Carl's devotion to duty and ambition should carry him far in his Naval career.

"Mick" emerged from Mundys' Corners, Pennsylvania, at the foothills of the Allegheny Mountains. He began his Academy life after an industrious year at the University of Pittsburgh, where he studied chemical engineering and was an active member of the Pershing Rifles Drill Team. When at home, "Mick" spends much time hunting, fishing, or improving his marksmanship with the bow. However, he finds the greatest pleasure in gliding over the waters of the Severn as a member of Navy's 150 pound crew team. With hopes of attending Nuclear Power School, "Mick" has enjoyed studies and intends to serve the Navy in research or development.