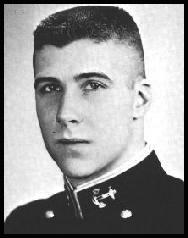 Bruce came to the Severn's gilded shores after having excelled in high school football, track, and baseball and having been elected president of the student council of Skaneateles High School. After the usual back breaking grind through plebe year, in which he amazed even himself by getting through, he found himself thoroughly absorbed in academics and proved his worth by maintaining a starring average. After a while an added sidelight began creeping into Bruce's pastime endeavors as some members of the opposite sex began to play little intrigues into our boy's life. His easy way and sly techniques had a certain spell on them. Never dismayed by any warning of the perils of the eternal triangle, Bruce managed to maintain his carefree attitude and single status throughout the Academy. Through his work as a member of the advertising staff of the "Log", Bruce has added another facet to his background for the promising future ahead. 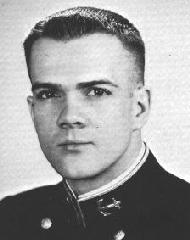 After a year and a half at the University of Massachusetts and an equal time in the Navy, Cole entered the Academy with a fleet appointment. As a plebe, he took a liking to its grey walls and would not hesitate to express it. He divided his time between studies and sports with a star average and a slot on the wrestling squad to show for his efforts. With a major in nuclear physics and an eye toward the submarine service, Cole will be a welcome and able addition to the fleet.