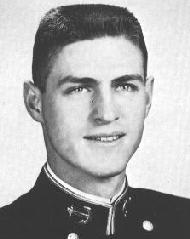 Larry, whose home town is Casey, Illinois, came to the Academy after graduation from high school. Since then, he always managed to keep himself quite occupied. In addition to the rigors of Midshipman life, he concerned himself with the Drum and Bugle Corps, the Protestant Chapel Choir, the Concert Band, Reef Points, the Russian Club, and the Trident. He spent a busy but extremely profitable four years here in Annapolis. His favorite axiom; "You only get out of something what you put into it." With an attitude such as that, Larry is certain to become a success in whatever part of the Fleet he decides to join upon graduation. 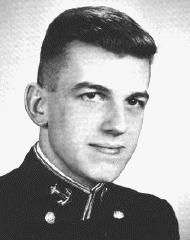 In these four years, we have come to know Tom as an eager, good-humored worker. Tom came to the Academy from Montclair High School. His cosmopolitan background includes New England, the South, the Midwest, and Canada. Being quite a man in academics, Tom's grades were always outstanding. After being presented with the challenge of overload subjects, Tom headed for majors in both mathematics and French. In extracurricular activities, he has done a fine job as sports writer and the joke editor for the Splinter, as a Public Relations Committee Sports reporter, and as publicity manager for the Chess Club. Tom has participated in varsity rifle, intramural gymnastics, softball, fencing, and cross country. Many weekends were enlivened for his roommates by the companionship of friends who accompanied Tom's drags to the Academy Tom has the drive and the ability to match his brilliant future as a valuable officer. 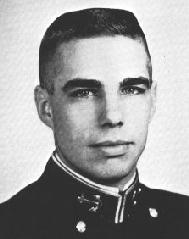 "Chooch," quiet and sincere, came to the Academy after one year at the University of Missouri. From the Middle West, he began his association with Navy life during plebe year and became very well adapted to it. His grades were not the best, yet he always worked toward the Superintendent's List. He also lent his support to company and battalion sports over his four years at the Academy. Battalion handball and company fieldball gave him his greatest recognition. In his extracurricular activities he supported the Newman Club and the Portuguese Club. "Chooch" always showed a sincere attitude and always was able to find the brighter side of any situation. With these traits he will certainly be a benefit to the Naval Service. Having enjoyed second class summer, "Chooch" plans a career in Naval Aviation.