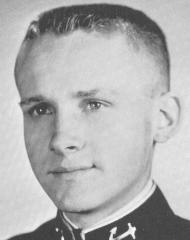 Larry fulfilled a life-long ambition by getting an appointment to the Naval Academy. In the field of academics, Larry maintained a high average in all subjects, gaining all the knowledge he could. He furthered this interest by taking additional electives in the field of science. In extracurricular activities Larry was a member of the Brigade Honor Committee and a prominent figure in the German Club. On Sunday morning he taught Sunday School at the Severn River Chapel, helping the River Command with its religious activities. Sportswise, Larry was one of our varsity catchers during his Academy days. His other sports interests were basketball, football, and golf. Larry worked hard and played hard while he lived in Bancroft Hall, and he will continue to be a real asset to his class in the Service. 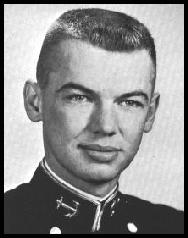 Bill chose to follow in the footsteps of his father and make the Navy his career. Before coming to the Academy, he lived in Japan, Hawaii, and many places in the States, but he favors Long Beach, California, as his home. His stays in Hawaii and Japan created an avid interest in swimming and skindiving. At the Academy, he managed to stay near the sea by sailing on the ocean sailing team. During the other seasons, he was active in intramural fieldball and soccer. His interest in the Academy was shown by his spirit at sporting events and in Brigade activities. He managed to keep on the Superintendent's List most of the time even though he was active in other fields. Upon graduation, Bill hopes to go Navy Line and then to the Submarine Service as soon as possible. 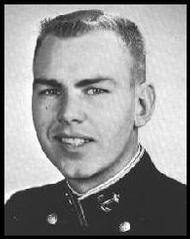 "Marty" was a prominent member of the "Log" staff, Ring and Crest Committee, company and battalion squash teams, and company basketball team. He once had the pleasure of defeating his company officer in a squash game. A good artist, "Marty" rarely missed in a plebe year poster contest or in Army game decorations. However, he was at his best as a cartoon artist. "Marty" had a joke for every occasion. As a plebe, he once amused the upper class on his table with one of the best "happy hour" performances ever presented at the Naval Academy. All "Marty's" Academy days were not spent with a paint brush or clippers. He was also an excellent student, an avid reader, a top-notch bowler, and a good golfer. He especially enjoyed second class aviation summer, the football trips, and those quiet Saturday nights with a textbook, soda, and record player. A person with as many interests and friends as "Marty" cannot help but enjoy the Service and profit from his career in the Navy.