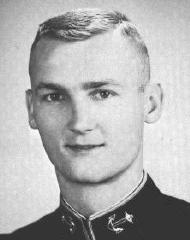 Jim's inherent cheerfulness made him a well-known classmate and friend. A talented and versatile athlete, Jim played football and baseball at Orange Coast junior College in Costa Mesa, California, and entered the Academy determined to earn his place among Navy's top athletes. A crushed vertebrae in the latter part of plebe year crippled these hopes but failed to dampen Jim's spirit in the least. Always watchful for the interests of the other guy, Jim earned a place even better than that of a top athlete, a place in the minds and hearts of his classmates as a man who refused to be broken by ill-luck, as a man who was as hard-hitting and inspiring off the field as he would have been on it. Seal Beach, California, can be proud of this son. Jim is and will always be a credit to the Brigade and to the Navy. 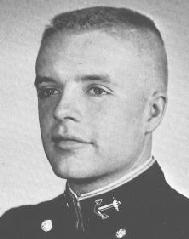 "The Nebraska Kid" is one of the friendliest and most well-liked members of the class. Mike's decision to become a Midshipman came after three years of Pre-Med at Creighton University. The academic change was a rough one, but Mike's drive and determination, coupled with his never failing good humor, brought him from the troubled to the calm waters. Mike's potential and outstanding ability in all fields of endeavor have made him a credit to the Brigade. These attributes will carry him far in any career that he should choose. Mike found time to add a great deal to the company and battalion sports teams and to the Brigade activities as a member of the Public Relations Committee, the Honor Committee, and as a Company Representative. It can truly be said of Mike that he is ready to help a friend at any time. 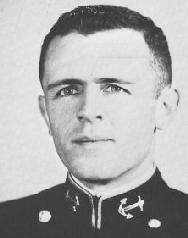 Hailing from New England, "Jack" grew up near the Portsmouth, New Hampshire, Naval Shipyard. As a result, he has always been interested in the Navy. Jack came to the Academy after spending a year at Columbian Prep. While at the Academy, Jack participated in the Masqueraders and helped stage several Musical Club Shows. Naturally enough, Jack's special interests included girls, skiing, and hunting. As a member of the elective program, Jack's academic specialty was underwater acoustics. Perhaps Jack's most outstanding characteristic is his ability to remain cheerful in times of strife. Members of the company sport teams will always remember his aggressiveness and never-say-die attitude on the field. The future holds a bright promise for men of Jack's ability. We are certain that he will fulfill this promise by continually demonstrating his qualities of determination and dependability.