After graduation from Boston Technical High School in 1957, Jim attended Northeastern University for one year, where he studied chemical engineering. With his Boston accent, and ready smile, and a store of scientific knowledge that enabled him to validate chemistry, he arrived at Bancroft Hall. During plebe year a first class physical culturist took it upon himself to develop the muscles of Jim's lanky limbs to Moose-like proportions. With this came the nickname "Moose," a moose call, paper moose antlers, and hours of physical exercises. No doubt the workouts had some beneficial effects, because "Moose" has been a stalwart on a number of athletic teams, including the plebe summer batt. crew, intramural cross-country, track, basketball, and fieldball teams. Sports, reading and water skiing, help Jim to pass his free time. The "Moos's" friendly personality, coupled with thoughtfulness, sincerity and determination, have made him a very well-liked member of his class and will aid him in his service career. Ken came to the Academy from Xavier High School in New York City with just the sense of humor needed to breeze through plebe year. His conversational ability during weekday study hours often resulted in intensive study during weekends. Science and engineering were always Ken's nemeses, but nevertheless, he concentrated on these in numerous overload courses. In athletics, Ken represented his battalion and company with determination and ability on the football field and in the squash court. His extracurricular activities ranged from the Newman Club to the Foreign Relations Club and from the Russian Club to the Aeronautical Engineering Club. During academic year, Ken subordinated his social whims to scholastic endeavors, but liberty and leave found his latent interests revived. Wherever duty shall lead him, it is certain that his competitive spirit, unbounded optimism, overwhelming friendliness, and honest modesty wilt bring him success. 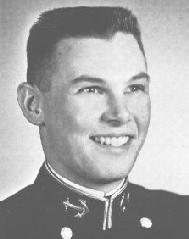 Russ' choice of the Navy as a career was a natural one since he was raised on Narragansett Bay. A Navy ROTC scholarship to an Ivy League college was passed up by Russ as soon as his Congressman informed him that he had been appointed to the Naval Academy. His sailing prior to coming to the Academy gave him a head start, and he was active in dinghy sailing throughout his tenure. He also played a good game of squash and did some cross-country running, but somehow he preferred sleeping to running. He also liked to write letters, listen to music, drag now and then, and when he had to, submit to intensive study. His quiet ways and friendly personality won for him many friends both here and away. He always played the system rather casually but claimed to have a special guardian angel who altered the O.O.D.'s course to other directions. After graduation Russ hopes to continue to make his life by and on the water with many years in the Navy.