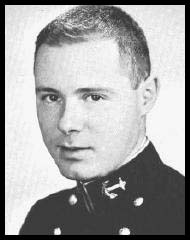 Fred came to the Academy as an experienced Submariner. Originally from Baltimore, Maryland, he brought with him his subtle humor that kept his roommates in good spirits. Fred, as an "ex-ham," and music lover, spent most of his time at WRNV as a disc jockey and general adviser. He always had a way with the fairer sex, but many a weekend found him trying to outguess the Science Department or helping another classmate. As a Maryland boy, Fred's athletic interests tended toward tennis and lacrosse. His hard work and perseverance made his four years at the Academy highly successful. Yes, success will be his trademark wherever the future may lead. 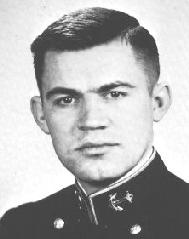 Being originally from Riga, Latvia, and more recently from Junction City, Wisconsin, Andy found it hard to make himself at home. He found it difficult to accustom himself to the strange language and customs which confronted him. With his conscientious and reserved attitude and quiet personality he was well-liked by everyone. He never had a harsh word for anyone and was always ready to help in any way he could. Andy's four years were filled with many and varied activities, among them: varsity soccer, wrestling, and various other intramural sports. And, of course, there were the ever present academics which he doggedly pursued. Andy will long be remembered by his classmates as a really great guy who was willing to do his all for anybody who was in need. 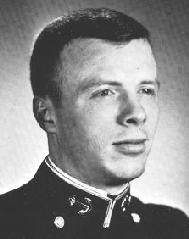 Joe, a staunch Southerner from Nashville, made his way to the Naval Academy after one year at The University of the South (Sewanee) and two years in the Navy. Part of Joe's two years in the Fleet were spent at NAPS so that he came to the Academy as a "Sophomore graduate." The females who visited USNA throughout the past four years never got many opportunities to meet this handsome redhead since most of Joe's weekends were spent either studying or out on the Severn River at the working end of a big oar. Joe, known to many of his classmates for his consistently meticulous appearance and outspoken opinions, has been eagerly awaiting the historic day of graduation. The Navy is equally anxious to receive this excellent junior officer who is strictly Navy all the way.