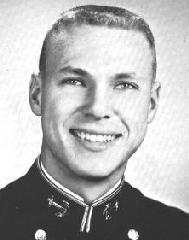 Although he was an Army brat, George abandoned the ways of our sister service, gave up the college life of the University of California, and left his native state to come dwell on the shores of the Severn. He not only dwelt on Severn's shores, but also spent a great deal of time on the river itself as a member of the varsity crew team. Academically, George honored himself and could usually be found on the Superintendent's List. His time at crew practice and that with the studies, however, never precluded his giving a hand to any classmate in need of extra help. The many friends George made in his four years are certain that with all of his outstanding characteristics and friendly nature he is a fine addition to the Navy team and his only limit is the top. 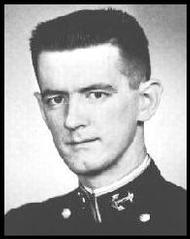 After a short, but exciting semester at Washington and Lee, Pat enlisted in the Navy. He was taken from a course in Moroccan Arabic at Georgetown University when he received an appointment to the Naval Academy. Nine months at NAPS brought Pat to the Academy with a deep desire for a Naval career. During plebe year he participated on the plebe baseball team, exploiting his experience as a high school pitcher. His height of six feet, five inches made him a constant threat in intramural basketball, as well as an accurate spiker in volleyball. His weekends were filled studies and bridge, a game at which he was particularly adept. Pat's obvious talent lay in the field of liberal arts, as evidenced by his high average in Russian and his constant enrollment in the advanced sections in the English Department. 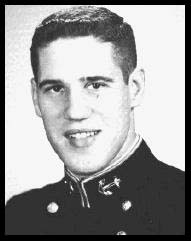 Clay, or "Sam Strain" as he is known to his company mates, claims Portland, Oregon, as his home, although he has moved around much of his life as an Air Force junior. Before entering the Academy, Clay spent one "Glorious Year" (as he terms it) at the University of Oregon. His antics and countless love affairs kept his classmates in stitches for four years, and his outgoing personality served to make him a popular man in his class. He was quite a wrestler in high school and did much to strengthen the plebe wrestling squad. Athletics, however, were by no means his only attributes, for he maintained an academic average over 3.2 and will receive a dual major in math and nuclear engineering. Activity wise Clay was a WRNV representative, a member of the Brigade Activities Committee, and the French Club, and a choir member in his Church Party. All of these attributes combine to make Clay an unforgettable member of our class.