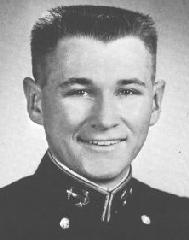 Jerry came to the Academy by way of Highlands University in New Mexico. He is one of the youngest members of our happy group. After his junior year in high school he participated in the Ford Foundation's Early Admission, Program and entered college. This indicated that Jerry has a great deal of mental ability, which he demonstrated by participating in the validation and elective program and maintaining a Superintendent's List average most of the time, with little effort. His academic interests were in Atomic and Nuclear Physics and Electrical Science. Jerry was a mainstay on the intramural sports teams, playing soccer, football, and squash. His extracurricular activities included the Public Relations Committee, the Newman Club, and dragging. Jerry was known as one of the most humorous men in the class. When the going got tough he always managed to come out with something funny to cheer us up. Jerry's ability and humor will keep him at the top in his field. 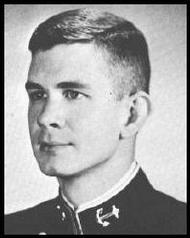 Dave, better known as "Nellie", came to the Naval Academy from Gainesville, Florida. He spent one year at the University of Florida where he was a member of the Naval Reserve Officer Training Corps. During his stay at Navy he rowed crew as a plebe and was an avid intramural sports enthusiast, playing such sports as volleyball, fieldball, and football. Lack of free time prevented him from participating in all the extracurricular activities which would have benefited by his services. He did, however, work for the Naval Academy magazine, the "Log", drawing cartoons and supplying ideas. One could always count on Dave when he needed cheering up. His sense of humor and friendly disposition will aid him tremendously as he pursues his career in the Navy.