After declining a number of athletic scholarships in the Buckeye State, "Bo" elected to make his place in the sun via USNA. As a carry over from his high school activities, he proved to be a stalwart competitor in plebe track; but, due to a few untimely injuries, he later chose to haunt the intramural circle. As for Brigade activities, Bo was a member of the Antiphonal Choir and the Portuguese Club. While academic duties kept him fairly busy, he still found time to keep the fairer sex well pleased, as he was by no means a wallflower. A firm believer in fun and frolic, Bo proved to be one of the best-liked members of his class. His many friends could always count on his fine disposition during rough times, however, Bo also possessed a quiet determination to realize his ambitions. Since he has always been a keen competitor, Bo is surely a credit to the Naval Academy and will be the same in any mode of military duty that he encounters. 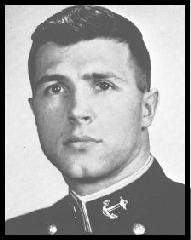 John, "Newt" to many, descended upon Annapolis from the U.S. Navy after two years with the fleet marines and one year at the Naval Academy Prep School. With the determination of an Idaho potato and no previous experience, he attained renown on the varsity lacrosse and soccer teams. John has found time to accept and faithfully fulfill the responsibilities of Class Secretary of '63. At the same time he was a member of the Class Honor Committee. Classmates know John for his high professional standards, competitiveness in athletics, and his outward friendliness to all. As John graduates, the Naval Academy's loss is certainly the Navy's gain. 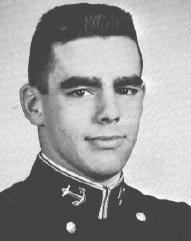 Bob came to the Academy from the Naval Reserve. After spending a year at Fordham University, he battled the rigors of plebe year and was successful. He was active in such activities as the French Club, Foreign Relations Club, and Catholic Choir. His years at the Academy went by quickly, but profitably, for he availed himself as much as possible of the academic opportunities presented him. Yes, Bob was well liked by all who knew him, and we are sure that the Fleet will be gaining a very capable officer in this young man.