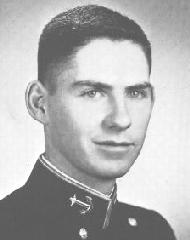 "Obie" came to the Academy after two years at Northeastern, University in Boston. Quiet and sincere, he applied himself to the curriculum. Although he had his biannual bouts with the Engineering Department, every final saw him come out on top, and he was no stranger to the Superintendent's List either. An athlete with diversified abilities, "Obie" found little difficulty playing on any intramural sport of his choice, but his favorites were company 150's and battalion squash. On the extracurricular activity side of the ledger, he was a member of the French, Newman, and Chess Clubs. After graduation, whether on the sea or in the air, success is assured in whatever he decides upon. One thing is certain; this is one man who won't soon be forgotten by those who knew him. 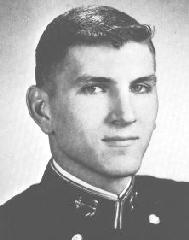 Coming to the Academy after a rigorous year at Rutger's, Mike began a career in the Navy which will undoubtedly carry him to the heights of success. Mike is that type of an individual; quiet, intelligent, well respected, and able to accomplish any task, as demonstrated by his outstanding performances in the classroom and on the athletic field. Having validated several of his plebe subjects, Mike easily won for himself a major in the difficult field of Russian. Not satisfied with this alone, he endeavored to expand his learning by studying additional scientific courses. Good marks were not the sole attainments of Mike's stay here; making firm and loyal friendships will probably be what people best remember about Mike. The undersea world holds Mike's interest and the submarine service will soon be acquiring a truly outstanding officer. 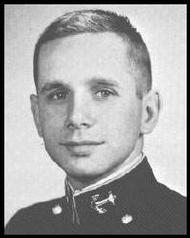 Slow talking, fast walking "Doc" was the continental gentleman of the Nineteenth Company. Al was characterized by his slow deliberate speech, his compatibility, and his innate fear of being late to class. Born in New York City to an Air Force family, Al chose to wear the Navy uniform. Fine music, the Newman Club, Concert Band, and ocean sailing were among his many interests. Al can be credited for saying, "Anyone can be an ocean sailor, but only a select few can sail the <I>Freedom</I>." After graduation, Al plans to make a long career of the Navy and, after retirement, to own "lots and lots of land."