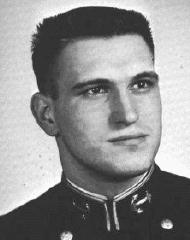 "Da Lump," like many others, arrived at the Naval Academy with many aspirations and dreams yet to be fulfilled. Hailing from Manhattan, Bill received much good humored ribbing about his accent. As far as vocal quality went, Willie had a fine voice which could deafen his roommates and often did. He wisely channeled this talent into the choir. Bill was in the Foreign Relations Club, <I>Lucky Bag</I> representative, and a hard driving water polo and football player. Despite a high average, studies took a minimum of time, with letters to his "O.A.O.," and the complete reading of the daily newspapers and professional magazines taking up much of his study periods. The wearing of the Submariner's Golden Dolphins is Bill's ambition in life. With his determination and phenomenal "luck," Bill will be a fine officer and a valuable asset to the Navy. 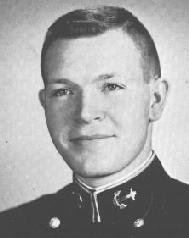 Before coming to the Academy, Bill attended Cogswell Polytechnical Institute for one year. A diligent and successful student, he was also a go-getter at intramural sports and a star in the Masqueraders. Yes, Bill spent many long hours rehearsing for his acting roles. "Sdtrastye" became Bill's familiar greeting once he had developed a taste for Russian. Encouraged by his language study, he pursued an understanding of that nation with the overload program of the E H & G Department. A genial man with the girls, his wit and humor often helped make an entertaining and enjoyable afternoon at sports events or drag sailing. His outlook and reserve will aid his career as an officer. A good conversationalist and a man with ideas, he added much to both his company and his class. 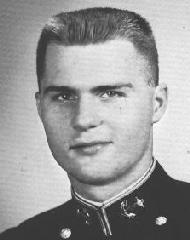 Chad came to the Naval Academy from Schulenburg High School. An enthusiastic participant in sports, he devoted much time to becoming one of the best shot-putters on the plebe track team. After plebe year his talents were focused on the intramural sports program where he participated in battalion football, track, and company fieldball. Chad spent youngster cruise aboard the heavy cruiser <I>Macon</I>, learning more about both the Navy and East Coast liberty. During second class summer he was first a striper at TRAMID in Little Creek, Virginia, and then got his full share of Chinese Wingovers at Pensacola. After a quiet youngster year, Chad, along with most of his classmates, learned the true meaning of the word "Study" when second class year academics commenced. His affable personality and ready smile have won Chad many friends during his four years at the Academy. His readiness to encourage and help his classmates will carry him far in the future.