Ken came to USNA from Jamesville-DeWitt High School, where he was a member of the football, wrestling, and track teams. He continued his athletic endeavors at the Academy by participating in battalion football, company cross country, and softball, in addition to an occasional dip in the swimming pool. Academics demanded a great deal of his time, but "Moose" accepted the challenge and maintained a good average. During plebe year one of his enjoyable experiences was entertaining people with his banjo playing-before reveille. Between flying at Pensacola and a trip to Hawaii, Second Class Summer was one of the high points of "Moose's" four years by the Severn. With his subtle sense of humor and dynamic personality, he should go far in whatever he chooses for the future. 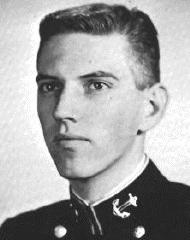 Emerging from the limestone country of the Hoosier State, Jim entered Annapolis upon graduation from high school. Although engineering was not his most evident talent, he managed to beat the academic system. Between studies, his tenor voice found outlet in the Chapel Choir, the Glee Club, and in the company lounge. When not spending his afternoons sailing knockabouts, he was able to be found perfecting his favorite pastime-sleeping. He hopes to obtain the golden wings of Navy Air upon graduation. His methodical nature and determination to succeed will make Jim a valuable addition to the Navy. 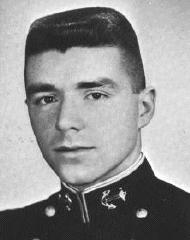 Max inspired many of us with his friendship and dedication to the idea of doing every job well. A good student, Max devoted many hours to varsity track and cross-country, in addition to the French Club and the Political Economy Club. His able assistance was appreciated on the staffs of the Log and Reef Points. In addition, he took full advantage of the electives program in an effort to better his education. This selfless attitude of continual effort is indeed a most noteworthy attribute, and an essential one for a successful Naval officer. This factor, combined with his outstanding personal character, will undoubtedly pave the way to a rewarding Naval career for Max, in every way an officer and gentleman of the highest caliber.