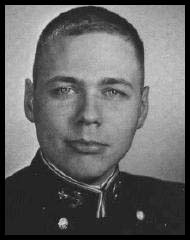 Dave traveled a long way from Portland, Oregon, to USNA, coming by way of Lewis and Clark College where he spent a carefree freshman year. At the Academy he knuckled down and rode out a stormy plebe year. He came through, tattered but grinning, and moved on to greater things. He taught at the Chapel Sunday School, where he displayed a great attractiveness to the very young ladies in his classes. He developed a mean game of squash and many an afternoon found him swinging a racket in Macdonough Hall. Never one to be glum, the grinning Irishman from the far west was a very serious, dedicated young man and is bound to bring credit to himself and to the Academy in his future years in the Navy. 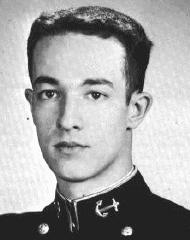 Charlie, a "rebel from God's country", came to the Academy straight from high school. His chief sports interests included any event in intramural track and sessions of Russian Roulette with various academic departments. His extracurricular activities consisted of increasing his already extensive knowledge of Naval and military history, following the exploits of the Arkansas Razorbacks, and trying to prove that "F" equals "MA". When he manages to get back home to his beloved Hot Springs, Charlie likes to fish and water-ski. Charlie has been widely known for his easygoing personality and his ready smile. His high ideals and personal integrity will make him a welcome addition to the service. 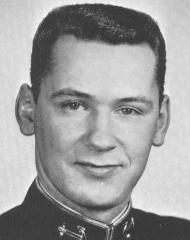 This ardent champion of the "great Northwest" entered on a Congressional appointment by the Honorable Jack Westland. His keen, perceptive mind consistently kept him on the Superintendent's List and made him an outstanding student in the Department of English, History, and Government. A promising start in 150-pound crew was cut short by a recurring back injury. His other interests lay in a wide variety of outdoor activities, the most outstanding of which was golf. He played for three years on his high school squad and continued to play as frequently as time permitted during his years at the Academy. As well as being an active participant, Tom is also an enthusiastic follower of collegiate and professional sports. He could correctly be classified as an expert on records and statistics, not only in sports but in many other fields as well.