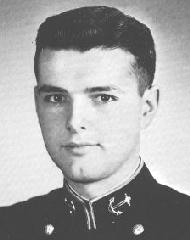 Terry enthusiastically claims "Wonderful Wyoming" as his home. He spent one year there at the University of Wyoming before answering his true calling by coming to the Naval Academy. Terry, a hearty sports fan, participated in numerous intramural sports and has made a reputation as a fine competitor. Always putting forth his utmost, Terry greatly bolstered the team effort. One of Terry's many contributions to the Academy has been a multitude of lost golf balls on USNA's course. Terry has a quiet confidence which demands the respect of all that know him. Together with his acute sense of humor and his warm personality he has won many friends while at the Academy. The Naval Service will gain a fine leader and an ambitious learner when Terry receives his commission. 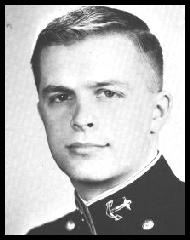 John attended Columbian Prep School to prepare himself for the Academy. As plebe year progressed, "Pat," as he was now called, found military life a rigorous one, academics and athletics occupying a ma)or part of his day. His endeavors with the academic departments saw him struggling with engineering courses and above average in the Arts, a situation which continued throughout his career at the Academy. Youngster year brought John a varsity letter in baseball and a new experience, soccer, a sport in which he set his goals for another varsity "N". When spare moments prevail you might find him in the library, since he is an avid student of history, philosophy, and religion. While at the Academy he was a member of the Newman, Political Economy, and Foreign Relations Clubs. His hobbies include guns, sports cars, and, of course, the fairer sex. John is anxiously looking forward to a career in Navy Air and, perhaps, in Naval Intelligence. 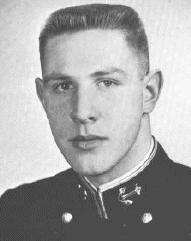 Although the youngest member of his class, Ray matured into a real man in the last four years. Always the first man out with the latest joke, Ray kept the sun shining on the darkest day. Often with a nudge in the ribs, Ray would be prodding someone on to bigger things. As the runner-manager of the track team, one could never tell if Ray would be beating the clock or watching it. In keeping with his track talent, Ray took many hiking expeditions into the far reaches of Annapolis to commune with the natives. Ray's diary, "the Rossicky," contains the most humorous and accurate written account of the record of the Class of 1963 to be found anywhere. When something needed fixing, one could always count on Ray for advice and service. In the future Ray is bound to be a successful Naval Officer with all obstacles being surmounted by his drive and enthusiasm.