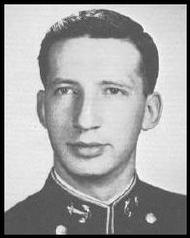 A tall six-foot-two, Vance, or "Moose" as his classmates fondly called him, was always easy to find. His engaging deep voice could be heard from the center of almost any crowd. Sunday mornings would find him lending his rich bass voice to the Antiphonal Choir. Afternoons, when he wasn't looking for a longer mattress on which to study, he could be found at Hubbard Hall, rowing lightweight crew, or at the fencing loft practicing with the epee. Vance's two years in the Navy before the Academy fully imbued him with a sense of thoroughness and order. He will be well remembered for his constant polishing and washing everything in sight. With a ready good nature for all, Vance managed the balance between leadership and comradeship with the ease of one well qualifed for comand. The Navy is gaining an officer of the highest caliber who will add much to his service and his profession. 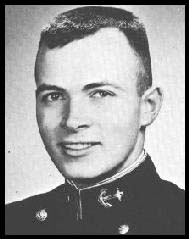 The big "Bear" came to the Academy from Quincy, California, where the mountainous terrain instilled in him a rugged, vibrant, and certainly friendly spirit. Endowed with a great love for the outdoors and the adventuresome life, Jon has a zest for living that encompasses every activity during the day-whether it is participation in a contact sport, which Jon enjoys, or learning Russian grammar, which Jon does not particularly enjoy. In either case, his determination is a constant source of inspiration to us his classmates. Visible proof of Jon's talent is easy to find for he is the Editor-in-Chief of this <I>Lucky Bag</I>. We, his classmates, will always be grateful to Jon for the unselfish dedication he has given to this publication. Those who had the privilege of working with him will attest to Jon's organizational ability, to his patient listening, and to his ever-present good humor. And, though beset with such a time-consuming task, Jon always had time to think of others and be of any service he could. His career will undoubtedly be one of continued good service. 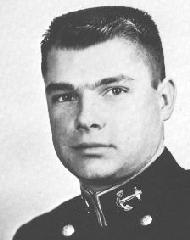 Don came to the Naval Academy with one year of education at Hershey Junior College and a desire to learn more. Interest in academics, hard work, and little relaxation made the Superintendent's List a reality once in a while for Don. Although studies occupied most of his time, Don did find time for a physical education as well, participating on company and battalion teams. Soccer, fieldball, lacrosse, and tennis were among his favorites. Don's biggest problem was trying to make people believe that a place called Hummelstown really existed. A desire to learn and a willingness to help others should be a good start for Don's road into the future.